It’s unanimous! From Okotoks, Kelowna, Medicine Hat, Michigan, Munich, Tokyo and beyond, there is an undisputed consensus the Calgary Stampede is unique.

Countless Stampede-isms create what is world renowned as the “Greatest Outdoor Show on Earth,” including the dripping poutine; the mini donuts or deep-fried everythings on the midway; the livestock show-and-tells; the terrific concerts; the excitement and thrill of the rodeo.

And the action and thunder of the outriders, the horse teams and the drivers of the GMC Rangeland Derby chuckwagon races.

Newbies and seasoned Stampede goers say that, of all the unique and special attractions of Stampede, the chucks may be the most awe-inspiring. And the 2018 edition began this past March at the exciting and action-packed Chuckwagon Canvas Auction.

Although some old habits are tough to change, chuckwagon insiders wince about referring to the chuckwagon covers as “tarps.” They proudly and adamantly point out they are “canvases” – not tarps!

Canvas sponsorships are vital for the drivers and for the annual occurrence of the race. The sponsorships are also a quirky barometer of Calgary business climate in both good and bad economic times.

“We were not only thrilled by the final amount of the bids,” says the beaming David Sibbald, president of the Calgary Stampede, “but also delighted by the diversity of the sponsors. It’s a win-win for everybody. The chuckwagon races are a special event that no one else in the world does like we do, and the canvas sponsorships make it possible for us to bring it to the Calgary community.”

Most Stampede visitors (with or without plaid shirts and cowboy hats and boots) and the TV audience fail to realize that about 80 per cent of the canvas auction money goes directly to the driver. It is a substantial boost for the high overhead of seasonal chuckwagon racing.

Since the Stampede is a not-for-profit organization, any revenue from the auction is put back into the sport and reinvested in Stampede operations for: the latest equipment, technology and handling methods; increased drug testing for animals in Stampede competitions; a new invitational process for chuckwagon drivers that considers driver safety record history as a key criteria; rebuilding the inside rail of the racetrack for better footing and greater safety during heavy rain; and the Nutrien Western Event Centre which uses leading-edge animal-care practices to ensure the safety of animals in exhibition and competition.

There is a discreet but common question about canvas sponsorship that most don’t dare ask out loud. Aside from being loyal Stampede boosters, what ROI do local companies and groups get for their generous five- and six-digit sponsorship bids?

“Of course it is great exposure and it promotes their brand, as the racers compete around a sold-out grandstand with their sponsor’s logo on the canvas,” Sibbald explains. “Not only the on-site exposure with the people in the grandstand but the TV reach is tremendous, almost 200 million homes.

“The sponsors also get the value-added aspects of a uniquely intimate Calgary Stampede experience. The sponsorships include the opportunity to host clients and staff to various events on the grounds, before, during and after the races; visiting behind the barns and becoming a part of our Stampede.”

Sibbald, who has been actively involved for decades, is passionate and supercharged about the focus of the Calgary Stampede. “Our job is to create a dynamic guest experience for the 10 days in July. We are constantly moving forward with making the Stampede better and more exciting each year. While the Stampede will always include long-standing traditions, we believe in continued evolution and improvement, like developing a world-renowned animal-care strategy.”

Stampede attendance is carefully tracked and, according to recent trends, about four per cent of visitors are from the U.S., another five per cent are international and about 90 per cent converge from across Canada, a majority coming from Calgary and the surrounding areas.

“Of course it’s a sport; it’s also part of our western heritage and it’s my family’s way of life,” says Kurt Bensmiller, the personable, soft-spoken and top-ranked 34-year-old chuckwagon driver from Dewberry, Alberta.

The winner of three of the past four GMC Rangeland Derby chuckwagon championships admits that being a world-champion driver and earning the highest bid at the 2018 canvas auction is not only the result of much hard work and achievement but, personally and professionally, it is an opportunity.

“It’s a great feeling,” he says with a proud smile. “It’s a good indicator how the rest of the season will be for our team. There is a lot of work to be done.” Bensmiller explains that professional chuckwagon racing is a six-plus month commitment, although the season and the “circuit” make it seem shorter for many people.

“The Stampede is biggest stop of the year – it’s our Stanley Cup finals – but there are eight other stops, including big races like Grande Prairie, Dawson Creek and Strathmore.”

At Bensmiller’s level, it is quite a gruelling and challenging operation. Although he currently has 42 horses in training, he travels the circuit with two tractor trailers, 28 horses, his family and two paid staff.

“We have been lucky to be successful with the races and the sponsorships in the last few years. We have a good group of horses and some new up-and-comers. We should be strong, but anything can happen,” he says with years of training and winning-and-losing experience. “We’re excited and also a bit worried. You never know until the end of the summer where it will all shake out. By the third week of August or so, we’ll know how well we did in 2018. But it’s a long time from now to then.”

Bensmiller openly admits that canvas sponsorships are crucial. “Aside from being a terrific sport, we treat chuckwagon racing like a business. It’s how I budget my whole year and how many new horses we buy.

“Horses are athletes. Just chiropractor and massage fees cost more than $10,000 a year. But if you don’t look after your athlete, they’re not going to look after you.” 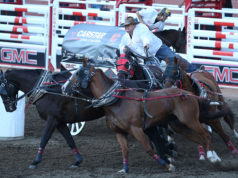 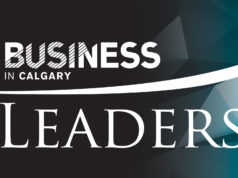 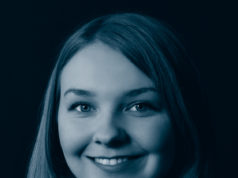