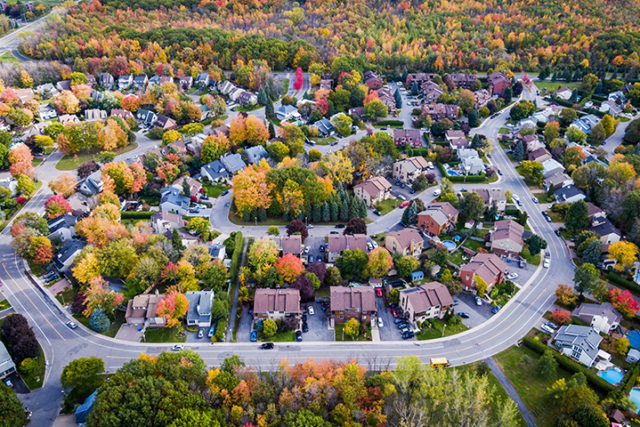 As is the case in most urban centres, homeowners pay a sizable premium for what some would call the “convenience” of inner-city living. But for those Calgarians pursuing the “Canadian dream,” amenities such as a garage, a backyard and breathing room are worth far more than convenience. Life in the suburbs aligns well with what families really want, and maybe most importantly, is easier on the wallet.

According to the numbers released by the Calgary Real Estate Board (CREB), the city’s surrounding areas accounted for 22 per cent of total regional sales in May and most of that is from Airdrie, Foothills Region and Rocky View Region. Calgary’s average home sale price in January was $472,741, while in a suburb like Airdrie, for example, the average came in at $386,891.

The real estate market in Calgary’s three major outlying suburban centres is attractive for not only first-time buyers but for those who want more space, civic and social amenities, and to settle into community-centric and slower-paced living.

In the last decade, the city of Airdrie has essentially doubled. Of the 68,000 dwellers, more than 78 per cent are in the under-50 age bracket. According to the CREB® Calgary Regional Housing Market Statistics May 2019 report:

At just under 28,000 residents, the town of Cochrane is quaint, affordable and a convenient location for those seeking easy access to the neighbouring Rocky Mountains.

A typical detached home in the town of Okotoks was built in 2002 and includes 1,491 square feet and three bedrooms on a 4,973-square-foot lot. In January:

While the market is expected to move towards more balanced conditions, the transition will likely take most of the year. Experts are quick to confirm it is still a buyer’s market, so sellers need to try harder.

“If sellers are serious about moving, they need to have their home show at a ‘10 out of 10’ and be aggressive in their pricing,” says Suman Brar, REALTOR® with Luxe Homes, Century 21 Bamber Realty Ltd. “The first three weeks are critical as that is when you get the most activity on a listing.

“I think we might see a slight uptick in activity as we head closer to the spring. There is a lot of pent-up demand from buyers who are waiting for the market to ‘bottom out,’” she says. “Eventually they will have to make a move, because let’s face it – marriages, children, divorces and life changes are going to continue to happen.”

New supply is expected to ease, as price adjustments will cause some consumers to delay moving into another home. This should help slow inventory gains in the latter portion of 2019 and reduce the amount of oversupply in the resale market.

“In the last few years, builders have been busy adding to their spec inventory,” says Greg Kennedy, real estate agent and owner of CalgaryHouseFinder.ca. “They seem to be pulling back now, which bodes well for the market as it decreases the number of listings coming on.

“We all know that the new stress test brought in by Ottawa made things even more difficult for first-time homebuyers to get into the market,” says Kennedy. “But the good news is, there’s quite a bit of rumbling in the industry about the likelihood of that relaxing in the foreseeable future. If that happens, we’ll see a significant shift in suburban home sales.”