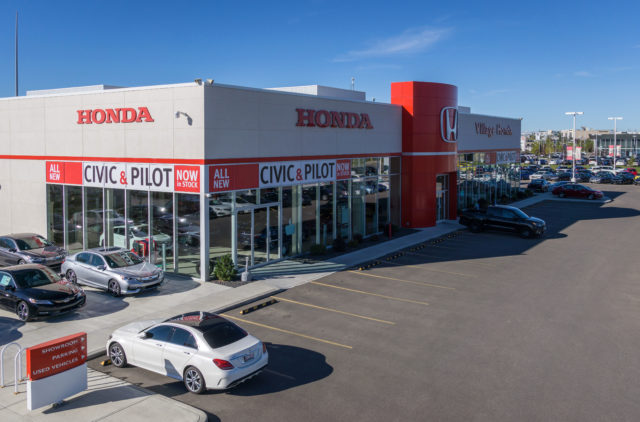 Village Honda is a story of success and confidence. Three Calgary entrepreneurs took a chance on their community and won. Partners Gerry Wood, Peter Finch and Ken Stephenson worked together to make Village Honda one of the best Honda dealerships in all of Canada.

It started in 1987 when Wood and Stephenson were looking for a new business opportunity. Wood’s southeast dealership, Woodridge Lincoln Mercury, had record sales every year, and Stephenson was a successful businessman with the perfect piece of land, just off Crowchild Trail NW at Motel Village. The idea of Village Honda was born.

Wood recalls, “Honda was an up-and-coming manufacturer that people were paying attention to. We were a domestic dealer but considered ourselves students and still do. We were aware of what was going on across the street so there was a little intrigue there about pursuing Honda. It was a well-respected name although just starting out.”

In 1988, Honda offered just four models: Civic, Accord, Prelude and CRX, but sales and popularity were growing and Honda saw the opportunity for a new Calgary dealership. “They [Honda Canada] saw that we were selling a lot of cars and hitting it out of the park and I think they knew that we could make it happen,” says Wood.
Looking for a Home
Honda was on board with the proposed site off Crowchild Trail NW, but the residents of Banff Trail were not. The community did not want another car dealership in the neighbourhood, and opposed the project. While the re-zoning application made its way through the red tape of city hall, Village Honda opened a temporary location in trendy Kensington on Kensington Road and Crowchild Trail NW. It was a unique arrangement with Calgary engineering company, Underwood McLellan and Associates.

“UMA was an engineering firm that was positioned on some neat retail space so we were able to negotiate with them to get part of their office for the showroom, which had room for about two or three cars, and part of the parking lot. It was small but it worked,” says Wood.

Joe Chiarizio was the first general manager at Village Honda. “We had an architect that was quite artsy and built the showroom boutique style with Tivoli lighting, rounded corners and for colours there were green and orange and black floors. It made a striking first impression.”

Wood recalls that finding a temporary location for the Village Honda service department turned out to be an even bigger challenge. “We looked around and really had to beat the bushes and ended up finding a city-owned property that was under the bridge on 10th Avenue. It was far from ideal but we didn’t have a lot of choices.”

Gerard Leclerc was hired on as the new service manager at Village Honda, “Support beam poles were everywhere and we had to manoeuvre around them and then make sure not to hoist the cars too high or they would hit the ceiling.”

On top of that, Leclerc thought criminals were targeting the service shop. “We had a mud lane way at the back to park cars and in wintertime, the snowplows would go over Bow Trail and shoot snow and slush and rocks onto our vehicles, sometimes smashing out windows. We thought it was vandals and even called the police until we realized it was the snowplows all along.”

The Flintstone’s Residence
In the meantime, with the ongoing neighbourhood resistance, the Motel Village re-zoning was turned down and Village Honda had to find a new permanent location – and fast. At about the same time, a new partner came on board. Dr. Peter Finch was Gerry Wood’s neighbour and – after years of operating a successful dental practice – was looking for a new challenge. He always had an interest in the automotive industry and so the two neighbours teamed up and began the search for a new location. There were few options so Wood and Finch took a chance, and built the new dealership north of Crowchild Trail near Nose Hill Drive, renaming it Crowfoot Village Honda.

“It was in the middle of nowhere,” recalls former service manager Gerard Leclerc. “We used to sit there in the morning and watch the deer come over the ridge and where there are houses and businesses now, it was just open field with lots of coyotes.”

“It certainly got quiet after dark,” says Wood. “It looked like a lonely outpost on the edge of town so we were continually priming the pump by offering service specials, no appointment oil changes and opening longer hours. That was one of our fortes since day one, providing the best service to bring people back.”

Finch played an active role in the design of the building and to make the dealership stand out, they decided to paint the entire building purple. “So, when you drove up Crowchild Trail heading west there was this purple building,” says former general manager Joe Chiarizio. “It was conversational. Everyone said ‘wow what a colour,’ but they sure found the place.”

Adds Finch, “The building actually took on the name the Flintstone residence after the ’60s animated TV series. It did get a lot of attention, especially from the people at Honda who initiated new criteria for dealership colours after we painted our store purple.”

The new dealership had its share of growing pains as Wood recalls. “It did take longer than we thought and it was painful financially at first so it was good to have Peter there as a partner and we could talk to each other and remind each other that with hard work it was going to get better, and it did.”

Indeed, things did get better and sales kept improving. When the service department became so busy that it outgrew the store, Village Honda opened a separate service centre across the road on Crowfoot Rise NW.

Move to the NW Auto Mall
By 2011, Village had outgrown its Crowfoot location and needed more space. Construction began immediately on its current location in the Northwest Auto Mall. “It was another six or seven kilometres up the road,” says Wood, “but there were other dealerships in the mall, all import manufacturers, so it became a destination, which really helped, and today it’s working like a charm.”

Peter Finch had a keen eye on what the new store should look like. He had been in the dealership daily since 2002 and talked to hundreds of customers about what they liked and didn’t like about their car shopping experience. “Car dealerships can often be intimidating for people to walk into and surveys show that’s particularly true for women, so we wanted to change that,” says Finch.

Indeed, the attention to detail is evident immediately upon entrance. Featuring floor-to-ceiling windows for plenty of natural lighting, the showroom is uncluttered with room for 15 vehicles. The customer lounge offers comfort and luxury. “We actually modelled it after an Air Canada Business Lounge,” says Finch. “We paid close attention to the colours, the fixtures and the furniture. There’s always freshly-brewed coffee and healthy snacks. Our aim is to give our customers the best possible experience while waiting for their vehicle.”

The Village Honda service department is equipped with 28 service bays and close to $1 million in technology and diagnostic equipment, but according to Barry Jordan, the general manager at Village Honda, it’s the employees who really make the dealership stand out.
“Some of the best people in the industry are working in this building; some of the top performers are here; some of the best technicians are here; some of the top service advisers are here. We have amassed 115 people who are the best in the business and that’s a full stop. Our detailer has been with us over 30 years. That’s amazing and you just don’t get to see that anywhere else.”

Looking to the Future
Honda has grown along with Village. From four models in 1988, the Honda lineup now features 13 different models including cars, SUVs, vans and trucks. The brand has experienced tremendous growth, and for more than 20 years, the Honda Civic has been the bestselling car in Canada.

Village Honda is a multiple winner of the Consumer Choice Award, and in 2018 was the only Calgary dealer to receive the prestigious Honda Driving Excellence Award for top quality service. It’s also a winner of the Honda President’s Challenge Award for sales volume.
Village Honda is committed to excellence. Ongoing staff training is a constant. The company boasts an industry-leading website and has embraced digital technology to provide today’s savvy consumer with the information they want, whether it’s online or in the store.

Good people, a friendly inviting dealership and tremendous products have all come together for success at Village Honda.

“It’s always about the people,” says Finch. “We are a team of strong, ambitious people ready to grow, adapt to industry changes and better serve our customers,” Gerry Wood concurs. “We’ve had success for more than 30 years and the Honda products are exceptional and just keep getting better. We’ll be around for another 30 years serving our customers.”