Almost one year ago, Sandip Lalli assumed the role of president and CEO of the Calgary Chamber. The private-sector business executive started the job at a time when Calgary sat in a precarious spot: slowly emerging from a devastating economic downturn, suffering massively discounted oil prices and debilitating pipeline restraints, facing burdensome governmental policies and decisions, and managing steep unemployment which left much of the downtown core empty. It was not, it’s safe to say, the best the city had been.

Seemingly undeterred by the circumstances, Lalli assumed the role with gusto and, 10 months later, is happy she did.

“The first word that comes to mind [when I think about the last year] is fantastic,” says Lalli. “Every day I wake up and remind myself that I am in such a privileged position to be able to make tangible differences to businesses, individuals and Calgary.”

One reason for her optimism: the strong and positive response to the 128-year-old Chamber’s “It’s Grow Time” rally cry, unveiled in September. Aimed at inspiring and challenging the Calgary business community to look to the future and grow, the initiative features Calgary businesses from all sectors and all sizes banding together with a unified voice.

“Businesses have come on board and are united in their sense of purpose and the opportunity they have to positively influence Calgary’s future,” Lalli declares. Local heavyweights Imperial Oil, Nutrien, RGO and TransCanada have all voiced their support.

There have been a lot of challenges too, not least of which has been the economy. Lalli also notes the Olympics plebiscite cycle as another low point. “I felt it was disjointed,” she laments. “The communication between all levels of government and, in turn, with the public, was frustrating to a lot of people. However, it is vital that the city fails fast from this, gets back on its feet and pushes forward.”

She believes 2019 will be a significant year for the city. “With two elections scheduled, the focus is going to be all about competitiveness, investment, deal flow and supporting businesses to scale. We will advocate for change to eliminate and/or reduce the many barriers that governments have put in the way of free market economics.”

Government policy over the past years, she continues, has prevented the business community from the exceptional growth it envisions. “The cost of doing business in Canada has increased while in other jurisdictions it has decreased,” she bemoans.

For example, she points to the impact of sharply increasing municipal property taxes, along with other layered costs such as the minimum wage increase and carbon tax. Added uncertainty comes from the provincial royalty review and increases to corporate taxes.

“At the same time, a flurry of federal and provincial unfriendly business policies and regulatory roadblocks have stifled competitiveness and stood in the way of Calgary’s economic recovery,” Lalli continues. “As examples, we point to the federal oil tanker ban, a lack of nimble response to U.S. business tax reform and a slowing of the regulatory approval process through constant shifting of the goalposts.”

In addition, she notes, the proposed Bill C-69 threatens to add further regulatory delays and puts a chill on investment.

“We recommend that all levels of government stop burdening businesses with increasing costs, fully consult businesses before moving the policy goalposts, and incorporate a ‘layered cost assessment’ as part of the policy development process to mitigate current and future unintended consequences,” she appeals.

During her second year at the Chamber, Lalli plans to unite more businesses under the “It’s Grow Time” rally cry, as well as continue its work on policy and advocacy. “It’s what we call being the podium of record,” she explains. “We are both an active voice for the business community, as well as a catalyst to bring forward a united voice from businesses to the ‘podium’ to advocate for business-friendly policies. We contend that what’s good for business really is good for the city.”

While this city isn’t her first home, Lalli, along with her husband and seven-year-old daughter, are proud Calgarians today. “Calgary is a great place for business as we have grit,” she smiles. “We have fight, a desire to create and a stubbornness to never give in. I know our business community is one of the most supportive business communities in the country and every day something new and exciting is happening.”

In addition to being plugged into Calgary’s business community, she sits on a number of boards, including the Royal Canadian Mint, Calgary Municipal Land Corporation and the Global Transportation Hub.

Originally from Edmonton, Lalli grew up in a typical Canadian environment of family and hockey. “I grew up with my parents, grandparents and two older brothers,” she says. “My parents were very engaged in the community and that sense of always looking for opportunities to pay it forward has remained with me.”

Having travelled a fair bit around the world, she’s grateful for living in Alberta and, more specifically, Canada. “My fabric of being from Edmonton and Canada shapes how I see the world,” she says.

Though she never wanted to be something or someone in particular, she did have a strong feeling of wanting the world to be equitable and wanting to have the opportunity to challenge inequity in some way in the future. She also enjoyed business and was a participant in Junior Achievement, which was her first exposure to the business world.

She studied at both NAIT and the University of Alberta before she sat for her chartered professional accountant, certified management accountant qualification. She then completed her MBA at Athabasca University and in 2009 was awarded her doctorate in business administration from the University of Phoenix. “I was awarded a fellow, chartered professional accounting, in 2015,” she says. “That was a great culmination of my business experience and education.”

Lalli began her career as an accountant at a family counselling centre in Edmonton. She then moved to Calgary, still in the finance industry. Soon after, she was recruited by Cargill Limited, one of the largest global privately-held companies providing food, agriculture, financial and industrial products and services to the world. This was the start of a long and varied journey with the company that covered several roles across several countries, including the U.S., China, Japan, India, Australia, England, Switzerland, Russia, Papua New Guinea and Mexico.

Her most recent role prior to joining the Chamber was as president and CEO of Calgary’s Keystone Excavating Ltd., a role that did not end the way Lalli originally envisioned. She was hired by the board of directors in June of 2015 to turn the 35-year-old company around and increase its value. For the previous five years, it had been in double-digit decline. The economic downturn in Alberta, however, made recovery virtually impossible.

“The economic decline occurred surprisingly fast, as investor confidence in Alberta’s economy weakened and construction projects vanished at the same time current projects were being scaled back,” she explains. “Further, the increasing regulatory burden made it clear to me that the company needed a strategic change.”

She considered a number of options: divest by closing the Edmonton office and reducing the Calgary office, exit the residential market (except for two legacy clients), enter the environmental reclamation industry with an additional capital commitment, or sell the entire company.

“Alternatively, I considered liquidating and proceeding with a sale of assets,” she concedes.

“Even though I knew that I would be working my way out of a job, I felt that a sale of assets and closure was the correct decision – but I wanted to cease operations while retaining Keystone’s legacy.”

With intimate knowledge of the effects of the recession, Lalli does believe Calgary is on the other side of it today. “Because a recession isn’t all about commodity prices, it’s about the marketplace,” she explains. “And Calgary’s marketplace is on the up. There are still challenges to overcome but the economy is progressing.”

It’s a crossroads moment in Calgary’s history, she says, and the goal is to enable the business community to scale up and grow.

Oil and gas, she maintains, is a vital industry. “Canada is a responsible natural resources producer that sits on some of the largest proven oil and gas reserves in the world. The fact that we still only have one main customer for our product is quite frankly an atrocity. We need to consistently be demonstrating our prowess in sustainable development while continuing to raise the bar on innovation that will reduce our environmental footprint.”

Governments too, she says, have a role: to unite on a responsible energy strategy that will diversify the customer base and help Canada compete globally for investment. “We are losing $80 million a day and tens of thousands of jobs and residual benefits as we dither,” she says.

At the same time, while recognizing the world will rely on oil and gas for many decades to come, Lalli urges the province and business community to be brave and catalytic voices in essential conversations about the world’s future relationship with energy and how to power our lives more sustainably.

Lalli encourages integrated industry, where a company solves problems within multiple industries. “Calgary has been leading the world when it comes to agriculture, technology, energy, manufacturing, creative services and life sciences, and we will continue to be a city that focuses on growth and innovation.”

She views the Chamber’s purpose, in this regard, as building a community that nourishes, powers and inspires the world. “And that’s a vision that is applicable to all businesses, no matter what size, stage of life or industry,” she adds.

Though an uncertain and difficult time for Calgary, Lalli and the Chamber will continue to provide strong, measured and visionary leadership for the city’s business community. The year 2019 will be anything but boring. 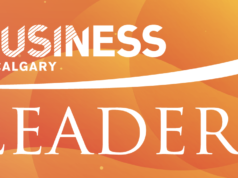