For Tim Logel, president and CEO of Logel Homes, 2017 was an excellent year. Not only did he launch his namesake company in May – the culmination of 40 years in Calgary’s homebuilding and real estate industries – his other company, multi-family builder Cardel Lifestyles (which he co-founded and has been president of since 2000) had its best year in 17 years. If that weren’t enough, Logel and Lifestyles were each recognized, through seven different awards, as leaders in the industry and city. The year, it is safe to say, was a great one.

“In homebuilding, all along the way, I’ve tried to stay focused on what victories would move the companies along, so that we’re always progressing, having breakthroughs and moving forward with change and improvement,” Logel explains about his approach to business. “It’s exciting to set goals and achieve them.”

A philosophy learned from his father, who raised cattle on a farm north of Elmira, Ontario. Logel, the eldest of seven children, grew up in Waterloo. “From a young age I learned my dad’s epic work ethic,” he recalls. “I learned about doing things right the first time. I learned how to organize a farm. I learned how to have a safe farm operation. My dad also shared with me his vision of excellence in terms of the product that we put on people’s dinner tables.”

It was on the family farm where 16-year-old Logel got his first taste of building, helping his father erect a barn. “We had to go through the framing, the electrical, the process of building it – and something clicked,” he says. “Whether it was the smell of lumber, or that there was nothing there but the field and then there was this building – I’ve been hooked ever since.”

The experience also taught Logel the value of a dedication to quality. “We had a focus on doing it well and that’s still with me today: if I am going to do something, I am going to do it to the best of my abilities. That’s what my dad said would give me the greatest satisfaction in life.”

And much satisfaction it has given him. In 2017, the company had the most closings ever, with 273 people moving into their town home or condominium during the calendar year. It had an impressive 241 sales, and has led the multi-family segment since 2006 for sales and permits. To top it off, Lifestyles was named Alberta’s Multi-Family Builder of the Year at the Alberta Awards of Excellence in Housing. The award is based on four criteria: sales, customer service, site safety and construction/design, and is a testament to the company’s excellence in all four areas. In addition, Cardel Lifestyles has been named one of Canada’s Best Management Companies two years in a row.

Logel Homes meanwhile, broke ground on its inaugural development, Auburn Rise in Auburn Bay, in September. With 70 of the 373 units sold to date, Logel says it’s a tremendous start for his new company. “It’s an outstanding location, with the option of three grocery stores, extensive shopping, a hospital and a lake; a vibrant, add-value location that the customers are responding very positively to.”

“I would call 2017 a breakthrough year,” he continues proudly, “because we’re in a slower economy and a challenging marketplace, but we’re having more success than we’ve ever had. Fourteen per cent growth in 2016 [at Lifestyles] and an amazing 27 per cent growth last year. My team, which is the best team I have worked with, has been focused on finding solutions at every level of the homebuilding business.”

Founded in 2000 by Logel and Ryan Ockey (who is also president and CEO of Cardel Homes, a single-family homebuilder), Lifestyles came about when Logel, who was then vice president of Cardel Homes, saw an opportunity to get into the multi-family housing market. “I could see that multi-family solved challenges with the housing market, then, now and in the future,” he explains. “And that is: how do you provide more choice? And how do you provide more affordability and become more efficient?”

Logel had, to that point, been in the Calgary real estate and building industries for over 20 years. He started as a Realtor in the late 1970s. After selling a new home for Del and Carol Ockey (founders of Cardel Homes), he began selling homes for them on a regular basis. By 1988, he was Calgary’s top real estate agent and would remain so for the next five years. “In 1990, I was Re/Max Canada’s number one Realtor and number three for Re/Max around the world,” Logel says.

He eventually moved into marketing and then sales at Cardel Homes. In 1996, he gave up his real estate licence to take on the role of VP at Cardel Homes. “Those days were foundational for teaching me the things I needed to know to become a builder,” he reminisces, “but that was always my lifetime goal, to make my first investment in a piece of land and begin.” In 2000, his vision of a multi-family division finally took root in Lifestyles. In 2005, Logel gave up the position of VP at Cardel Homes to focus solely on condominiums and town homes.

“With condominiums and town homes, you can take the same amount of land and provide greater efficiencies to more people,” he explains. “The design and construction of multi-family is driven by efficiencies and innovation, and it just opens the door for more choice for the customer.” He notes wide price ranges for units: “Last year we offered condominiums and town homes starting from the $150,000s right up and over the $400,000 range.”

Since 2000, Lifestyles has completed 16 developments, primarily in suburban Calgary, with over 2,750 condominiums and town homes.

Knowing his customers, and understanding what they want, has been a key to Logel’s success. “Right from the beginning, customer experience was the most important thing to me,” he says. “I started with a vision of exceeding customers’ expectations, treating customers like I would want to be treated, and then making strategic goals, actions items and decisions based on that vision.”

Logel uses good old-fashioned verbal communication to learn from his customers, as well as a third-party surveyor called CustomerInsight. “With the [CustomerInsight] data we have a whole spectrum of input from customers that we can sift through and come up with new goals and action items to improve,” he says.

Customer feedback also spurs innovation. Last year, Lifestyles won the SAM Award for Best Innovation Idea for its design to bring fresh air into the unit from the outside, as opposed to from the controlled mechanical system in the hallway. “The idea came from our customers requesting a solution to make their condominiums cooler and provide them with fresh air,” Logel explains. “It’s had awesome results with the customers. We use it in all our buildings now.”

The surveys are sent to customers one month after move in, and then a year later, to measure the level of satisfaction in all areas of the home-buying experience. “We have been thrilled that we were winner of the prestigious Home Owner Mark of Excellence for best experience for Calgary multi-family builders for three years in a row,” says Logel.

Customization is another way Logel appeals to his customers. “We believe that allowing customers to put their own signature on their condominium or town home, even though it’s in the affordable price range, has been a big reason for our success.” Appliances, cabinet colours, countertops, floors, lighting and many other aspects of a unit can be customized.

Logel also credits his customer-focused, in-house team (now at Logel Homes) which includes the acquisition, design, sales and marketing, construction, administration, finance and customer service functions. “I have a strong belief that there is very little better in a company than collaborative teamwork,” he says.

Sons Brayden and Kevin, each of whom have been exposed to and involved in the business from a young age, are now integral to that team (Logel also has a daughter, Jenessa, who lives and works in New York City). Brayden is vice president of sales, marketing and customer experience, and Kevin is the site superintendent at Auburn Rise.

“For Kevin and I it’s been an amazing opportunity to learn from our dad,” says Brayden. “What’s been really cool about it is that all three of us have been able to share in some really big victories. Starting our own company with the Logel name is really about building a legacy and building on my dad’s passion for always exceeding our customers’ expectations.”

Logel’s brother, Brad Logel, who has worked with Logel for over 15 years, is also continuing on at the new company as an area manager.

It’s this type of change that propels Logel forward. “It’s not work for me,” he says. “I have a passion for it and a sense of urgency to set new goals and accomplish them quickly. I’m energized with each victory.”

A philosophy he follows in the rest of his life. “I just try to live a full, healthy, active life,” he says. This includes running, skiing and spending time with family and friends at his cabin on Shuswap Lake. He and wife, Sherri, give back to the community as well. For example, Logel Homes is one of 11 builders involved in the RESOLVE campaign to end homelessness in Calgary. Sherri is a member of the board of the Calgary Women’s Emergency Shelter and chairs its resource development and communications committee. She is also co-chair of its Turning Points gala.

“Not every day is an easy day,” Logel acknowledges, “but you shake it off and wake up the next day and keep going. Because, I think most entrepreneurs would tell you, not everything we’ve learned is a guarantee for success going forward. We have to keep reading, keep learning, keep listening to the customer because we’re in a world of flux and change. And not everyone is going to have an appetite for it, but for those companies that are adaptable, it’s quite an opportunity.”

With an excellent year in the books, Logel anticipates many more to come for Logel Homes. His company, his sons’ new ideas, his approach to the business – all will continue to build on what’s been achieved. The legacy is well underway. 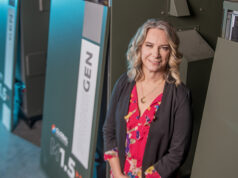