Ambitious entrepreneur. Bold visionary. Resolute leader. Passionate philanthropist. These are just some of the ways to describe Frank Lonardelli. The outspoken, larger-than-life founder, president and CEO of Arlington Street Investments (ASI) – a Calgary investment firm focused on real estate development – has done much to earn these descriptions: built, grown and sold multiple businesses in different industries across North America; established and funded a life-changing scholarship for underprivileged students; and, today, is a vocal proponent for a better Calgary.

“Our city is probably the best in Canada to live in, for so many reasons,” he asserts from ASI’s head office in the newly-converted National Block on 17th Avenue SW. “We’re set up to be very successful, but we have a serious risk around the entrepreneurial spirit these days, because we don’t celebrate it anymore. This protracted down cycle has done some very bad things to people.”

Indeed Calgary’s market has, Lonardelli attests, varied greatly over the years he’s been here. He moved to Calgary in 2000; his flourishing food services business – which he founded in 1997 and has since become one of the largest privately-owned food service companies in Western Canada – beckoned him west. Once here, he began investing in Calgary real estate.

“In 2000, a barrel of oil was $40 to $50 dollars, capitalization rates were eight to 10 per cent, and the vacancy rate was 10 to 13 per cent,” he reminisces. “Within three years, oil went to $146, office vacancy rates went to zero and capitalization rates compressed by 100 per cent.” It’s these “peak-to-trough” cycles, as Lonardelli calls them, which have shaped his business perspective within his unique Calgary portfolio.

His real estate thesis has been to buy non-assembled assets in the path of growth. In Calgary, he started with properties on 17th Avenue SE, in the beltline, Ogden and Ramsay. Today, ASI (which he founded in 2012) has 13 real estate projects, nine of which are along the 17th Avenue SE corridor.

“One of our key strategies is to try and secure an entire intersection,” Lonardelli explains, “create an ecosystem where the buildings feed off each other. So when we’re thinking of a retail client for one building, we’re actually thinking about how it plays into the balance of the tenants within that intersection.”

Lonardelli’s ability to envision what can be derives from his childhood. Born the youngest of four (he has three older sisters) to Italian immigrant parents, he grew up on Arlington Street in Winnipeg – the murder capital of Canada at that time. After his father passed away when he was three, Lonardelli’s mother Elena worked day and night at an Italian restaurant to support the family.

“I don’t think I had a childhood, I had to grow up very quickly,” Lonardelli reflects. “And that caused me to make decisions at a very young age. I learned to see around corners before the bend showed up.”

While attending Gordon Bell High School he was a sports star. “I had scholarships to play three separate sports in university,” he says, “but I didn’t have the grades to get into university. My focus wasn’t school, it was what I had to do to get through the day.”

With the support and mentorship of a teacher, Lonardelli eventually graduated with sufficient grades for university. He completed his undergraduate degree in political science on an athletic scholarship and was accepted into law school.

“Hunger creates a lot of desire,” he reasons, “and in terms of coveting things, I always coveted business people and entrepreneurship. I knew I would never work long term swapping hours for dollars.”

Lonardelli started his food services business fresh out of university. Originally a cafeteria business, he expanded into coffee services, retail coffee, vending and other services. “That little company, which I started in the back of my friend’s fur salon in downtown Winnipeg, grew to several hundred employees across Western Canada,” he recalls. “We were managing 700-800 contracts including some very large corporations.” Lonardelli was 32 years old.

“But from the day I started driving cash flow into the company, I started investing into real estate,” Lonardelli admits. “I had very little strategy, but I was intrigued by all facets of it. I was involved with land, resorts, apartments, commercial, residential – you name it – in Winnipeg, Edmonton, Phoenix, Vancouver and Ottawa.”

After moving to Calgary, Lonardelli continued acquiring real estate as a part-time hobby when not running his full-time food business, which he eventually sold in 2003. Between 2000 and 2005, he acquired 12 C-class buildings in Calgary, and became more involved with developments and conversions.

And in 2007, he sold all his Calgary assets. “It was zero per cent vacancy and $146 barrel of oil,” he recalls. “I’d never seen a market like that and I thought we were at the height of it. So we went to market and got tremendous offers.”

Flush with cash and unencumbered by Calgary assets, Lonardelli travelled to Phoenix, where he purchased a number of broken condos. He also became involved in restructuring broken real estate projects.

“I then became very clear about what I wanted to do for the next 15 years of my life,” he explains. “Start ASI as my full-time company, bring on a team that could take it from zero to a billion dollars within a seven- to 10-year period of time, and focus on developing urban mixed-use assets.”

That team today comprises 10 people. “They’ve all bought into the vision,” Lonardelli says. “We want to create legacy assets up and down a corridor that we think is ripe for it. We want to influence the city in a positive way; leave it better than we found it.”

ASI has four divisions: investment, development, brokerage and tenant services. “We only deal with high-net worth accredited investors and family offices,” Lonardelli says. ASI always takes the single largest position in every project.

When it comes to 17th Avenue, Lonardelli envisions a place where every Calgarian – no matter who they are – wants to be. “We need greater cultural interaction,” he says. “We need a really friendly pedestrian interface that has all the day parts: breakfast, lunch, dinner, cocktails, entertainment. It has to be something for everybody.”

One of his ideas: close the street to vehicle traffic on weekends during the warmer months. “Make it pedestrian friendly,” he proposes. “As bad of a market we’re in, that street would be packed every single weekend if you shut it down and treated it as a destination location.”

He’s open about his frustration with the city’s development and planning process. “We dedicated $300 million into the East Village and are doing some very interesting deals with developers there, while the 17th Avenue property owners are under tremendous pressure from disproportionate property taxes and increased minimum wage. I can tell you that the [17th Avenue Retail & Entertainment District owners and operators] asked the city for relief but the city hasn’t provided any. When you consider how much money has gone toward city-led real estate initiatives, serious scrutiny is warranted.

“These are entrepreneurs who’ve been on 17th Avenue for two decades, paying into the tax base, employing people, offering services, and nobody offered them relief,” he continues. “I think it’s extremely short sighted.”

East Village, he acknowledges, needed to be developed. “And I absolutely think that the arena district needs to be developed. But we can’t do it the same way we did East Village. There are some things we did right and others we did wrong. I would suggest the development be critically reviewed by a non-arm’s-length third party.”

A multiplex arena, he believes, could help transform 17th Avenue and the entire southeast and Victoria Park corridor for the better. “We can’t lose the hockey team. It feels like it’s a coin toss as to whether it stays at this point.”

While he’s hopeful the parties involved will ensure an arena happens, he’s discouraged by the Olympic 2026 bid process. “People from all over Canada used to come to Calgary for one reason: it didn’t matter who you were, if you had a good idea and the shoulders to move it forward, you’d be successful,” he says. “But now it’s more of a win/lose disposition. We went from an abundance-based city to a city of scarcity. Greed with scarcity is a bad combination. It’s a real psychological issue we have to deal with.”

Had the Olympic question occurred seven years ago, he submits, there would have been no debate. “But now people are scared, and the worst time to make a good decision is when you’re scared, especially financially,” he says.

The benefits of hosting the Olympics – in addition to the long-term financial boon and the chance to showcase Calgary to the world – were lost on many, he says. “One of the catalysts for Vancouver becoming an investment destination was Expo 86. The same can be said about Calgary’s 1988 Olympics. No mathematical equation can quantify returns – experience and time does that. And what comes after no? What is the good news that our city is going to have after four years of nothing but bad news?

“We’re in a lost decade,” he concludes. “And I think it could be longer if we don’t figure it out. Success begets success, and we have to start winning in Calgary – at every single level.”

He points to Winnipeg’s experience for guidance. “Only in the last decade, since the [NHL hockey] team and the downtown revitalization, is money staying in Winnipeg,” he explains. “I want Calgary to be a place where Calgarians want to invest and, more importantly, reinvest. Right now it’s not.”

Lonardelli returns to his hometown every year to visit friends and run the Arlington Street Foundation Scholarship (ASFS), which he established and funded 10 years ago. Awarded each year to one graduating student from Gordon Bell, the ASFS pays for the university tuition, books and incidentals of the recipient throughout their undergraduate degree.

“I had a story about what happened when I was a kid,” he explains. “And I could have easily gone in a very bad direction. I believe that mentorship, with investments, creates tremendous opportunities. I just wanted to give back what I could have benefited from.”

Every year, Lonardelli presents his life story to the entire school. The Grade 12 students are then invited to write essays about their own lives for submission from which a recipient is chosen by Lonardelli and the board of mentors. “Our first recipient, Lin Ruttan, is now a teacher and on our board as a member and mentor,” he smiles.

Lonardelli and ASI have supported several charities and are now deeply involved with the Children’s Wish Foundation of Canada (CWF) in Calgary. “We have an internal 100 wishes campaign where we’ll grant 100 wishes over the next 10 years,” he says. Some wishes ASI has granted: a trip to Disney World for a boy named Rayan and his family, and a swim spa that allows a girl named Colleen, who suffers from severe limitations, to move freely.

Notwithstanding his concerns, Lonardelli’s outlook for Calgary remains optimistic. “Everyone feels the pain in this marketplace. Now, more than ever, we need the highest level of leadership. We’ve got some uphill climbing to do, but I’m positively disposed to the long-term future of our city and this great province.” 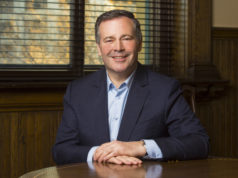