Success in business can be achieved in different ways. Gradually, at a snail’s steady pace; rapidly, with almost instant prosperity; through hard work, personal sacrifice and determination; with luck and fate on one’s side. More often than not, success is achieved in all of these ways, and more.

This is the case with Canyon Rigging. Owned and operated by Gregg Hampton, Canyon Rigging has been – in Hampton’s own words – a 43-year overnight success. “It’s been a long haul and the first 38 years were pretty darn hard,” says Hampton from his offices at Canyon Rigging’s 20,000-square-foot combined shop, warehouse and sales centre in southeast Calgary. “But we’ve been really enjoying our success, the fruits of our labour, the last five years.”

Having spent his entire adult life in the rigging industry, Hampton and his wife Debbie (who retired earlier this year) officially launched Canyon Rigging 21 years ago, as a two-person outfit at their ranch south of Okotoks. “We did extremely well, had a really nice living,” he recalls. “We were a force in the rigging industry. And then fate came along when our neighbours nicely asked us to move.” The request was not unreasonable: the business had grown too large for the rural property.

Hampton’s son-in-law, Daniel Harris, now president of Canyon Rigging, suggested they move to Calgary. “This was the first building I looked at,” Hampton reminisces. “We rented at first, then bought the building and kept the renter. Then I had to get rid of the renter because we grew too quickly. That was all within about six months.”

Four years later, the business is booming like never before. “Since the day we started this company, it has made a profit,” Hampton says proudly. “We’ve increased sales every year for 21 years. This year we’re up from last year, and last year was out of this world.” Today, the business employs 22 people, in the shop, warehouse and front office.

Hampton has no doubt about the reasons for this success. First and foremost: customer service. “Good old-fashioned service might’ve gone out of style,” Hampton shrugs, “but not here. We’re very respected for how hard we work at customer service. We’re always looking at how we can make a customer’s entire problem go away; leave them 100 per cent satisfied.”

To meet customers’ needs, Canyon Rigging has over $3.6 million of fully paid-for inventory – truck straps, cargo securement, tire chains, wire rope, chain slings, round slings, polyester and nylon slings, levers, blocks, hoists, winch line, crane line – in its warehouse. Adjacent to the warehouse is the shop. Half of the shop’s professional team – seven women – work upstairs in the sewing “suite” with top-of-the-line, $40,000-industrial sewing machines, sewing and assembling all manner of synthetic rigging products. The other (seven) half of the team works downstairs, building the chain and wire rope assemblies.

Approximately 50 per cent of the jobs are custom. “We’ve got everything to satisfy whoever walks in the door looking for rigging,” Harris says. “The beauty of having and doing everything here is we can custom make anything while they wait. It’s like coming to work and playing with Lego all day – we can build anything to the client’s exact needs.”

Hampton and Harris own Canadian and U.S. patents on the system. “RIG-IT Restraints are a series of lightweight restraints that run the whole length of a temporary high-pressure flow or pipeline,” Harris explains. “If a catastrophic separation of the line were to happen, the system is there to minimize the damage and danger to personnel. We’re potentially talking about a couple of hundred thousand pounds of force – it’s very, very dangerous.”

Canyon Rigging builds and sells RIG-IT Restraints to many fracking, cementing, injection, flow-back, coil tubing and drilling clients. “We’ve spent a lot of time and money developing it; it’s in high demand,” Harris says. “Between Gregg and I, we’ve come up with a pretty good mousetrap. We’re extremely proud of it.”

Quality, Hampton stresses, is non-negotiable. “You’re dealing with products that can kill,” he says. “There’s not one thing we sell that doesn’t have someone’s life hanging on it. You cannot sew a strap wrong. You cannot build a cable wrong. You cannot build a restraint wrong. There’s no room for error.” To ensure its products are safe, every piece of equipment is tagged with a working-load limit and tested on the shop’s pull tester – the most advanced in southern Alberta. “We don’t think that we’re selling good rigging, we prove we’re selling good rigging by testing it, making sure it hits the mark of the working load and the breaking strength,” Hampton says.

Clients range from small rural shops to multinational corporations such as Schlumberger, Trican and Step Energy, across Western Canada and into the northern U.S. “For a long time we haven’t put all our eggs in one basket,” Hampton explains. “Our clients are 30 per cent oil and gas, 30 per cent agriculture, 30 per cent construction and 10 per cent miscellaneous. We do not wait for change, we make change.”

He believes this adaptability – to turn on a dime in order to get business – has helped Canyon Rigging weather the most recent oil and gas downturn. “We’ll do a complete 180,” he says. “As soon as I hear oil and gas is slowing down, I go and sell to agriculture clients. We don’t have a meeting about it. Dan and I sit down and ask, ‘Is that a good idea?’ If we agree, we go for it.”

Being free of debt is a major advantage too. “We own the building and all the inventory,” Hampton reveals. “When we buy something, we pay for it. We have no debt. So when the bad times come, we’re not in trouble.”

Admittedly old school, Hampton doesn’t use a computer. “I know every single item in my warehouse within $10,000,” he says. “I know what I paid for it and how many I have. It’s very useful because the guys in the front don’t have to look it up. They just ask me and I tell them.”

That front includes the recently-created storefront, where customers can see what is available and purchase it on the spot. “It’s one-stop shopping,” Hampton beams. “Right now, 95 per cent of our orders are done same day and out of our inventory. That doesn’t happen anywhere else.”

Harris will continue the tradition once Hampton, now 61, takes his leave, though that date is far from certain.

Born and raised in Calgary, Hampton – a star athlete in high school with the grades to get into university – wanted to work, so he took a job after graduation at local rigging company Martin Black Wire Rope. There he met two men who would teach him much of what he knows today. He spent years working in the industry, and eventually opened his own business in the early 1990s. He later sold it and signed a non-compete agreement, preventing him from operating a rigging business in B.C., Alberta or Saskatchewan until 2001.

After marrying Debbie, the couple began Canyon Rigging, always abiding by the non-compete. For three years, Hampton and Debbie worked on the ranch building rigging systems, then travelled to Manitoba to sell them. Once the non-compete agreement expired, they expanded into Alberta.

“I can do every single thing in this shop,” Hampton reports. “Splice any wire rope, build any chain. I can sew on the sewing machines. Because when we started, Debbie and I were it. It’s a self-made company and we try to lead by example. We teach all our own people.”

Harris, who is from Australia, has been involved in the company for 10 years and became president one year ago. Both son and partner to Hampton, he has nothing but praise for his father-in-law. “We all look up to Gregg,” he says. “The majority of the younger people we hire view him as a mentor. You do a load of listening when he’s offering advice. I can say that personally, it’s well received.

“Success hasn’t changed him,” Harris continues. “He still comes to work in his Wrangler jeans and Carhartt shirt. He does own a tie and often jokes that one day, when he’s put to rest in a pine box, he may wear it! He’s the same old guy he always was.”

A culture focused on quality and customer service is ingrained at Canyon Rigging, and starts with Hampton. “I do not demand much,” he says. “I just want someone to work as hard as I work. We have a saying around here: you’re either all in or you’re all out. If you’re all in, great things can happen.”

“We treat everyone here like family,” Harris continues. “We reward the employees for their hard work and dedication and in turn they reward our clients. It’s a happy little circle that keeps turning around.”

Not surprisingly, Canyon Rigging retains its customers. “And we’re gaining at a tremendous rate,” Hampton adds. “We’re around 250 new customers per year, and I don’t think we lose two a year. We’ve been that way for 15 years. It’s a testament to our team.”

A host of approximately 200 distributors throughout Western Canada also sell Canyon Rigging products. “Little oilfield supply stores, independent NAPA stores and bumper-to-bumpers,” Harris explains. “They are a huge part of the backbone of this company and very important relationships for us.” For example, Red Deer Ironworks is the main distributor of RIG-IT Restraints.

Another of Hampton’s sons-in-law, Tyler Graham, runs a satellite division of the company in Prince Albert. “Tyler was one of the first employees and continues to do a great job in a very demanding agricultural community,” Hampton says. “Like all of our salesmen, he puts in countless miles delivering product that keeps people working.”

Seemingly impossible, the Hamptons passion for their business is matched by their passion for community. Every year, Debbie runs a coat drive in Okotoks for the Mustard Seed. This year was the largest yet, with 2,200 coats donated.

A ranching family (Debbie was raised on a Saskatchewan farm and has a passion for horses), the family is also a big supporter of local rodeo. They currently sponsor Kylie Whiteside, who will compete for the first time this year at the Calgary Stampede, while also supporting 4-H. After the September 11, 2001 terrorist attacks in New York City, the couple rode their horses to the U.S. border in a show of support. They raised $135,000 for the victims and drew over 3,000 people with them.

Though he acknowledges that one day he will retire, Hampton has no current desire. “As long as I’m able I’ll be here, because I love it,” he smiles. “It’s in me. People say, ‘Don’t let it define you.’ I’m very good that Canyon Rigging defines me because it is me. I worked my whole life for this.” 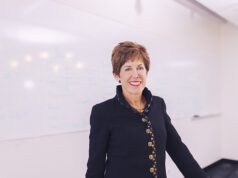 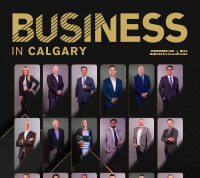