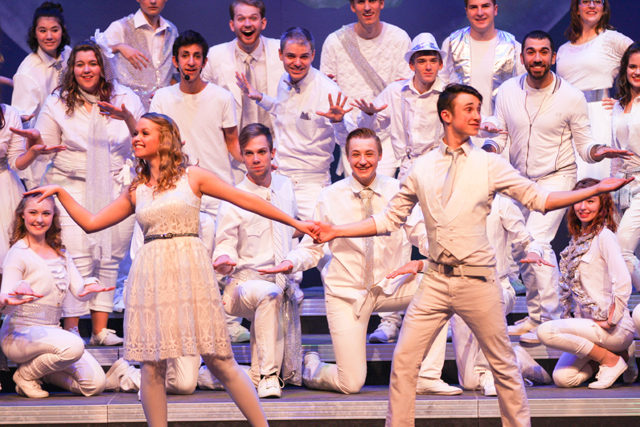 An Indian guru once said “Life is a song – sing it,” and Shirley Penner and her team at Youth Singers of Calgary (YSC) have taken that advice to heart. For the past 30 years, their group of instructors and performers has been sharing their unique musical program with audiences close to home and around the world.

The program began in 1986 at Mount Royal Conservatory when Penner was asked to design a junior high choir for 26 students. Penner merged classically-based singing with acting and dancing, and the class soon took on a life of its own. Within a few years, this class grew to 80 students however the college was only able to accommodate one class.

“I had to make a decision. I stayed on working on fund development at the college, but I took the Youth Singers out into the community,” says Shirley Penner, CEO of Youth Singers of Calgary.

After relocating a few times, the fledgling company found a home in Victoria Park Community Centre where it remained for 12 years, growing into one of the largest not-for-profit choral organizations in the country. Having outgrown the community centre, and after countless volunteer hours as well as donations from their supporters, YSC recently renovated a warehouse and relocated to its new Performing Arts Youth Centre in the southeast.

The 18,000-square-foot space houses four studios, a sound room, set and costume storage, and a priceless library of titles. The space is simple, functional and solid, much like the organization itself.

“The important thing is what happens inside the building,” says Penner. “It’s the young people! Building self-esteem and confidence and giving them all the opportunities to lead and grow.”

Performers have fun while earning high school credits and learning important life skills: time management, organization and teamwork. They learn to win with grace, work hard and make lifelong friends who share a love of music. And they’ve learned from the best. Shirley Penner was recently inducted into the Alberta Order of Excellence for her contribution and impact on the arts and the community. She has had an impact on thousands of youth in the three decades YSC has operated.

Today, the organization gives 500 performers in 15 divisions ranging from three years old to adult an inclusive place to perform. For 10 months per year, YSC performers work to perfect the group’s two main-stage Jubilee Productions which showcase the talents of hundreds of singers on one stage. With original arrangements and thoughtful theme and music selections, the main-stage shows are a city highlight.

Youth Singers performs approximately 100 shows a year including corporate events, community functions, malls, schools and charity events. The two semi-professional 12-member ensembles SHINE & ONCUE are more mobile than the larger groups and able to accept many of the shows offered to YSC.

Singers also enjoy the opportunity to take their shows on concert tours and enter competitions around the world. They have performed in more than 20 countries including Japan, China, Australia, many countries throughout Europe, South America and throughout USA and Canada.

The high standards, talented performers and credentialed instructors means Youth Singers always comes home with trophies and awards including first place in classes they enter, best overall choir honours, and the Esprit de Corps award for congeniality and sportsmanship, an award that is important to Penner as the organization was built on tolerance and support of other performers and is dedicated to developing leaders in the community.

One of Penner’s proudest additions to the roster of YSC programs is the STAR (Special Talents in Arts and Recreation). STAR allows children aged eight to 17 with cognitive delays to discover the joys and benefits of music education in a safe, stimulating and fun environment.

And for 30 years, Shirley Penner and her artistic, administrative and volunteer teams have produced both wonderful performers and wonderful people at Youth Singers of Calgary.