Calgarians work hard, and now more than ever they are seeking a lifestyle balance that helps them to play hard too. One way some are achieving this is by purchasing recreational properties that allow them to enjoy their leisure time in a beautiful location that offers the activities and amenities they want most. And for the majority of recreational property buyers, what they want most is water.

“We do our survey and look at recreational properties nationally and each year waterfront is the most popular,” says Elton Ash, regional executive vice president, Re/Max of Western Canada.

Proximity to the water is a must, but recreational property buyers are selective and patient. They are willing to wait for the perfect home in the perfect spot to become available before making such a significant investment with their discretionary dollars. In a province like Alberta that has fewer lake locations than Ontario or British Columbia, demand is high for those waterfront properties. So is the price. A Royal LePage report on recreational properties stated that vacation property values in Alberta are expected to grow by 8.9 per cent in 2018, placing the average at more than $770,000. Homes in areas like Sylvan Lake and Canmore are driving the provincial demand and spiking the average, but Calgarians looking for a weekend getaway are exploring other options as well.

Communities along such water bodies as Gull, Gleniffer, Pine and Pigeon lakes are offering great solutions to people looking for opportunities to get into recreational properties without breaking the bank.

“People are buying lots in places like Gull Lake and Pine Lake,” says Rick Easthope, realtor with the McKelvie Group. “You can take a $20,000 trailer and live at the lake for the summer.”

But many vacation homebuyers are looking beyond the September long weekend, seeking a place that is as appealing in the winter as it is in the summer. They are looking for short, easy commutes and access to activities all year.

“There are a lot of young families buying recreational properties so they are looking for biking, golfing, water sports, skiing. It’s about year-round usage,” says Easthope.

And by being in close proximity to these playgrounds, Calgarians are able to get a lot of use out of their recreational properties. Jeff and Leslie Pakish bought their vacation spot on the northwest side of Gull Lake in 2012 for that very reason. At only 175 kilometres away, it’s drivable for a weekend or day trip, allowing their busy family to escape the city at the drop of a hat.

“With two boys in hockey and our daughter in competitive dance, we find it hard to get there throughout the school year. The nice thing about living relatively close to the cabin is that if we can find a spare day we are able to head to the lake for a night or two. We spend our summers there, along with Christmas and spring break,” says Leslie Pakish.

They take advantage of everything the area has to offer: boating and kayaking, playing on the beach, biking and walking the par-3 golf course in the summer; sledding and ice-fishing in the winter. Family time dominates the motivation behind acquiring a vacation property, whether that’s young families like the Pakishes raising their children at the lake or baby boomers seeking a retirement home or legacy property for their grandchildren. While gen-Xers and baby boomers are the demographics most interested in acquiring recreational properties, millennials are also entering the market in search of a better life-work balance.

“We’re actually seeing that millennials are continuing to rent in the city and buying a recreational property as opposed to buying a principal residence,” says Ash. “They can work remotely out of that property in many instances, and it’s an opportunity to enjoy a better lifestyle.”

They know where they want to eventually end up and decide to invest in the property that will get them there. This is true of many people buying second homes in coveted areas. Trailing-edge baby boomers in their 50s and early 60s from across the country are leading the market, buying property in areas like Vancouver Island and the Okanagan with the intention of eventually selling their primary residences and retiring in B.C.

While B.C. areas like Invermere remain attractive to Calgary buyers because of the amenities and the manageable drive, other hot spots are cooling slightly this year as the market awaits the B.C. government’s speculation tax legislation this fall. The proposed tax intends to make housing more affordable by curbing foreign and out-of-province speculation by taxing foreign entities two per cent of the property value per year and Canadian owners from outside B.C. one per cent of the value. This has made Alberta buyers nervous about investing in the affected areas which include Vancouver, Victoria, Kelowna, West Kelowna, Nanaimo, Lantzville, Abbotsford, Chilliwack and Mission.

“We’ve had buyers tell our realtors that they’ll wait and see what occurs this fall when the proposal goes to legislature but we’re still seeing strong demand and strong prices,” says Ash.

The proposal doesn’t sit well with Alberta owners already in the area. David and Jennifer Vass’ vacation property on the west side of Okanagan Lake between Kelowna and Vernon has been in the family for the past 13 years, but they bought it out three years ago. Since then, they have spent a lot of time and money in the area in construction and renovation as well as recreation.

“We love it – the beauty of the lake, the wineries, the weather. It’s paradise on earth,” David Vass says.

The family spends three months a year in the area, enjoying summer and Christmas break at their piece of paradise. They pay $1,800 per year in property taxes but they do so without complaint because they love and support the area. But the speculation tax is something else entirely.

“We are fellow Canadians, and all of our extra money is going into the B.C. economy – restaurants, stores, construction contractors – and we hardly use any of the public services,” says Vass. “And now this new tax will be $10,000 per year on top of my property taxes. It’s a slap in the face and it would be disastrous for B.C. if it goes through.”

Should the tax get approved as proposed, Vass and many other Albertans would see no other option than to sell their vacation places and find somewhere else to invest that isn’t targeted by the extra taxation. But the legislation is far from a done deal. A lawsuit filed against the government argues that the speculation tax is unconstitutional, as the Charter of Rights and Freedoms guarantees mobility rights to live and work anywhere in Canada as well as protects Canadians from government discrimination. While the lawsuit may not succeed, it would put pressure on the government to defend the proposal in court and, as owners and realtors are hoping, to retool it.

Whether the speculation tax is enacted or not, it is still a good time for Alberta buyers to look for recreational properties.

“The economy is starting to turn around and there’s a bit more confidence so people are starting to invest again,” says Easthope.

And there’s nothing better to invest in than family memories built around a dream recreational property. 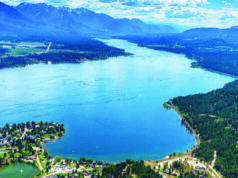 Business is booming in interior B.C. 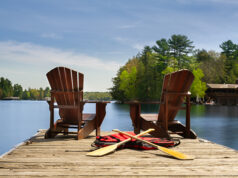 A market on fire