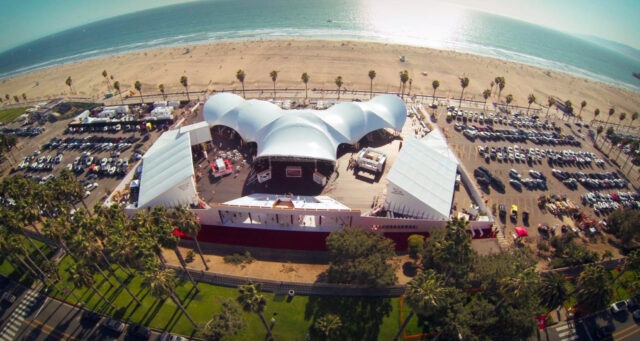 In 1971, a young engineer named Kurt Warner and his brother Gery set out to make a name for themselves in Winnipeg’s industrial shelter business. Warner Shelter Limited started making smaller tents to support forestry work, providing onsite structures for mining companies, and supplying small tents to utilities companies that would keep technicians out of the elements while servicing green boxes. Over the course of the decade, the Warner brothers expanded their offerings with more tent styles for more sectors.

“In the mid ’80s it became more of the event world and we branched out,” says Chad Struthers, vice president of Warner Shelter Systems Limited. “Then in the mid ’90s, oil ramped up and we were doing a ton of stuff with that. We’ve covered a great many sectors – we cover everything from standard construction, oil and gas, events, and now we have hail covers for car dealerships.”

Under Kurt Warner, WSSL continued to develop and innovate new and pre-engineered tent products in a variety of sizes and shapes for a variety of purposes including special events, commercial, agricultural and rental markets. The company has been a global leader ever since.

“Our Marquee product was the first of its kind. It was designed by our owner and since then the Marquee has become an industry standard and copied by our competitors,” says Struthers.
The Warner Marquee tent has fewer parts and is easier to put up so fewer people are required for installation. The Peak Marquee requires no guy ropes in most conditions and can be linked together in whichever configuration is needed to meet a client’s specifications. The design has become an industry standard and reinforced Warner’s place as a leader in the business.

Throughout its 50 years in business, Warner has added a variety of tents to the catalogue, from the saddle-shaped Arabesque that provides expansive height allowances and a clearspan interior to the award-winning Warner Dome that offers amazing acoustics and sight lines; the Warner Modular tents that are perfect for temporary or semi-permanent warehousing, retail and industrial uses to the Peak Pole Tent that is reminiscent of a circus big top but with the addition of modern technology and the possibility of being joined with the Peak Marquees through compatible gutters and walls. WSSL also introduced the Tent-C-Can in 2009 to offer clients cost-effective and low maintenance storage structures that can house two sea containers with space to work between them.

The company’s tents come in a variety of sizes, with the nine Peak Marquee models offering anywhere from 100 to 1,380 square feet under their canopy and the Modular style available in 10-, 14- or 20-foot walls with widths ranging from 40 to 130 feet. WSSL features small products that stand 10×10 while the largest custom tent it has ever done measured 160 feet wide x 300 feet long for the Arctic Winter Games. Nothing is out of the question for the experienced team at Warner Shelter Systems.

The tents are truly customizable. Whether clients are using them as an entertainment venue, for storage, as a dome for sports or an aircraft hangar, WSSL can add logos and branding to the quality fabric and offer creative solutions to meet any requirement. The tents are manufactured locally in Calgary out of the 70,000 square foot facility set on 10 acres in the southeast. Made from quality materials from the U.S. and Canada and designed for versatility and durability no matter the weather, WSSL has earned numerous awards for engineering design excellence over the years. The International Fabrics Association International (IFAI) recognized WSSL with Outstanding Achievement Awards for its Modular Clearspan, Arabesque, Bandshells, Marquee and Dome tents.

Awards are great, but it’s the clients that really matter. They agree with the accolades, and prove it through their long-time relationships with the WSSL team. These diverse clients are located across the globe, and the company’s reputation for quality and service has many high-profile clients coming to them first and often.

“If we don’t do it, we’ve sold it or helped somebody partner in doing it. Other than small functions people have in their back yards for a family celebration, if there’s a tented event that happens in the city, it comes across my desk,” Struthers says.

WSSL’s tents have been part of many amazing events over the decades including summer and winter Olympic Games, Arctic Winter Games, Super Bowls, an NHL Fantasy event in Vancouver, Nike Training Club Tour and a variety of symphonies, concerts and music festivals. It is also a huge part of the Calgary Stampede.

Warner Shelter Systems has long provided the tenting for the Greatest Outdoor Show on Earth. The team starts erecting tents in May, and leading up to the event they install everything from the 10×10 tents that cover bank machines to the welcome tents at gates to the impressive Nashville North entertainment venue.

“It’s a commitment that we’ve had since 1984. About 227 acres get completely covered with roughly 250 tents of various sizes,” he says.

While 65 per cent of WSSL’s business is conducted south of the border, the Stampede is an enormous undertaking and an important part of the company’s annual business. So in 2020 when COVID-19 forced organizers to cancel, it was a blow to the company. With so many other sectors affected, the company laid off its manufacturing departments, and those left brainstormed what to do to make up for the lost revenue from the global lockdown. The company had started offering tenting to car dealerships to protect inventory from hail a few years before, and there had been a sprinkling of dealerships invested in the protection. After last year’s devastating storms, insurance against hail damage was astronomical if they could get it at all, and WSSL increasingly showed up on dealerships’ radar.

Struthers put their efforts into expanding that part of the business and booked 19 dealerships for 2021 to have the tenting installed. This brought 38 of its 57 employees back to work within a month of being laid off, and a few weeks after that everyone was back busy at WSSL.

“Dealerships have asked us to tent over 85 per cent of their inventory as most insurance companies will insure the remainder,” he says.

To accommodate the individual layout of the dealership, WSSL tailors a configuration that will cover between 100 and 200 vehicles to shield them from the elements. This reduces costs for detailing, snow removal and hail insurance while also making it a more pleasant experience for customers to browse the lot. More and more, dealerships like Kramer Mazda, Country Hills Toyota, Charlesglen Toyota, Lexus of Royal Oak and Lexus of Calgary are looking to WSSL to bring creative solutions to the issue of hail damage, and there will be roughly 40 dealerships sporting WSSL tents by the end of hail season this year.

Now that the post-COVID world is starting to open up again, demand for tenting products has soared and WSSL’s business has spiked. Its inventory is depleted and tents are made to order with several weeks’ lead time. From concerts and festivals to a variety of businesses ramping up work again to the Calgary Stampede, Warner Shelter Systems Limited is welcoming in the return to normal with its complement of world-class tenting products.