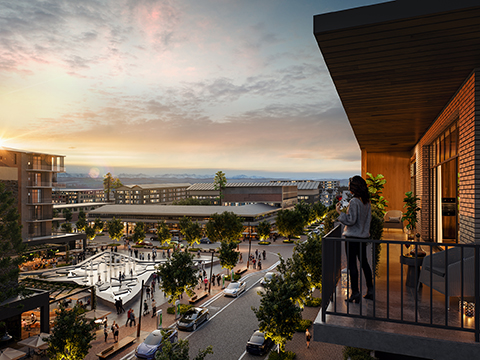 “New Urbanism” is an exciting new community planning and design concept based on the principles of walkable blocks and streets, housing and shopping in close proximity, and accessible public spaces. New Urbanism focuses on human-scaled urban design and is catching on in North America, with new urbanist developments in-demand and popular in Austin, Texas, Salt Lake City, Utah, Denver, Colorado and now, Calgary.

In late October, when successful Canadian builder, Dream Unlimited, revealed the first seven of 13 show homes in the grand opening of its 646-acre, mixed-use, “new west” Alpine Park neighbourhood, was Calgary’s first chance to see how a next-generation greenfield development – on the forefront of the new urbanism movement – will improve the way neighbourhoods feel.

Urban planners explain that modern urbanism design and development principles can be applied to new development, urban infill and revitalization, and preservation and also applied to all scales of development in the full range of places including rural Main Streets, booming suburban areas, urban neighborhoods, dense city centers, and even entire regions.

New Urbanists want to see the return of human-scale neighborhoods. They create tools to reform zoning and street design and develop underutilized building types—like shopfront houses and courtyard units—that contribute to diverse neighborhoods. They also advocate for villages, towns, and cities consisting of neighborhoods designed around a five-minute walk from center to edge.

Basics of the new planning and design concept are streets designed for people—rather than just cars—accommodating multimodal transportation including walking, bicycling, transit use and driving and providing plazas, squares, sidewalks, shops and cafes.

And it is a Calgary first! “To have a community of this scale and calibre in our own backyard is exciting as a Calgarian,” says Tara Steell, general manager of Dream’s Calgary Land division. “It’s such an inherently appealing concept, and residents will absolutely fall in love with the tree-lined streets, charming porches, and incredible public spaces.”

The architectural styles of Dream’s Alpine Park show homes are all uniquely Calgary-inspired and range from Craftsman and Contemporary to Farmhouse, Châteauesque, Prairie and Urban Mountain.

The timing of Dream’s Alpine Park is not coincidental. Momentum has been building for a few years. The opening of the Southwest Calgary Ring Road, a pivotal access to the community, and following City council’s unanimous approval of Stage 2 of the project, which includes the construction of the community’s Village Centre, an innovative naturalized stormwater wetland and a proposed sports and wellness campus, Calgary’s “new urbanism” neighborhood was ready.

“The Village Centre is the hub of Alpine Park and a big part of our community vision,” Steell points out. She also notes that, overall development of Alpine Park will create 1,700 direct and indirect jobs per year, for a total of more than 20,000 new jobs over the 15-year lifespan of the project. And on completion, Alpine Park will be home to more than 12,000 residents and create a projected 4,000 ongoing jobs throughout the commercial, retail, industrial and institutional areas integrated within the neighbourhood.