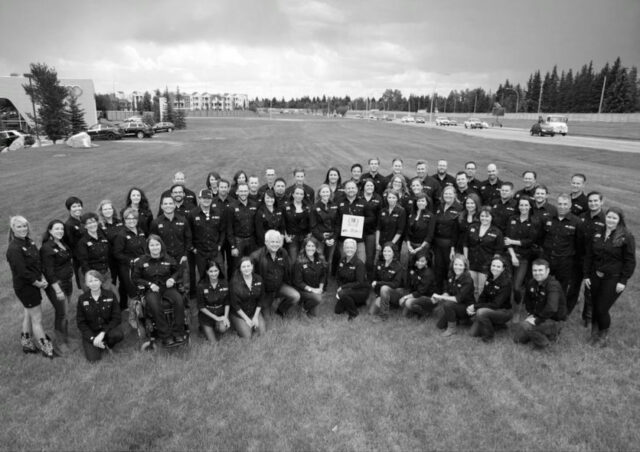 When Darrell Haight and Rhonda Smith founded their environmental consulting firm in 2006, they wanted a meaningful name that reflected not only what they do but also who they are. They landed on “Trace” for its scientific definitions paired with their responsibility to trace the history of the land to understand contamination. The rest of the name speaks to who the company is. Rather than limiting the future scope of the firm by calling themselves Trace Environmental, Haight and Smith instead wanted it to be all about the people. Trace Associates Inc.’s (Trace) focus on people has been a major factor in its success and growth over the past 15 years.

“The thing that stands out about us is the people we have,” says Darrell Haight, CEO and co-founder of Trace Associates. “We’re employee-owned, and we want people to get involved in the business. Some of our best ideas come from every corner of the organization.”

First as colleagues then as co-founders, the two dreamed of establishing a firm that did things differently and have attracted a group of like-minded and diverse people to join them.

“For me, it was about having a bit more control over my own destiny and choosing who I work with from a colleague perspective and also a client perspective,” says Rhonda Smith, COO and co-founder of Trace.

The colleagues came easily. Ryan Bull was Trace’s first employee and partner, and he and the founders approached others in the industry about the opportunity to build a new firm from the ground up. Carlene Meeks had been considering a move from a large engineering company and was drawn to Trace’s small-company culture and joined the fold early in 2007. Jason Hampson worked with Darrell, Rhonda and Ryan previously, so when Bull and Haight reached out the timing was perfect, and he joined Trace shortly after.

The five original employees quickly grew to 17 people by 2008. Just as Trace gathered steam, the world plunged into a recession, and the fledgling firm’s clients began putting projects on hold to try to ride it out. Trace had to let five staff go, and that decision weighed heavily on the partners. They vowed that they would never be in that position again, and they’ve been true to their word.

“We’ve hit two or three recessions since, and we haven’t laid people off,” says Haight. “We take a 10 per cent salary cut across the board, put the RRSP program on hold, cut expenses, tighten up spending everywhere and we focus on being positive, keeping the team together and coming out of it stronger.”

While other firms scrambled to hire and replace the people they let go during downturns, Trace’s team remained intact and positioned to ramp up quickly and effectively when the economy improved. Trace avoided layoffs throughout the major recessions, as well as COVID-19, through flexibility, adaptability and diversification.

“There have been some ups, but we’ve hit some of the biggest downs in history over the past 15 years without cutting staff, and that’s what I’m most proud of. It’s amazing what we did coming out of a COVID year, the size we were and still we made it through without layoffs. To me, that’s the biggest accomplishment we’ve had,” says Jason Hampson, principal scientist and partner at Trace.

When Trace started, it focused primarily on assessment and remediation projects for upstream oil and gas clients. After the 2008 crash, the founders continued to serve those clients while looking at other markets into which they could expand.

“We’ve done everything from small oil and gas well sites to some of the largest municipal developments in Alberta to the largest major pipeline projects in Canada. We hear from clients that they appreciate that we can provide the service of a boutique firm with the capacity of a large firm,” says Darrell.

Today’s Trace is prominent in the agriculture, oil and gas, renewable energy, real estate development, industrial, mining and government services markets and offers expertise in emergency management, sustainability/social responsibility, remediation, reclamation, risk assessment and hydrogeology, as well as information services and GIS mapping, natural science and regulatory and inspection services. If the project is in Canada and has an environmental component, it is likely that Trace can help.

“We diversified geographically as well. Within the first year Darrell moved to St. Albert and started an office there which helped us have more capability to do northern work,” says Carlene Meeks, director of quality and partner at Trace. “We grew in our services and market sectors. We would focus on a new service or market, and then build the next.”

Since the beginning, Trace pushed staff to be involved and not only invited input from all areas but also implemented many of those ideas. The leadership allowed remote work long before the technology made it easy and has remained flexible with hours to help staff live balanced, fulfilling lives. It also supported relocation which often led to new branches of Trace. The company has a staff of more than 100 with 22 partners and a presence in eight Western Canadian cities – Kamloops, St. Albert, Grande Prairie, Lethbridge, Saskatoon, Regina, Davidson, Stettler, Meadow Lake and Didsbury field offices and the headquarters in Calgary. The founders are exploring future opportunities to push east to become a national operation as clients are already pulling them into Ontario.

Trace’s goal has always been to be the best place to work and this desire attracts the best professionals in their fields. Once people join Trace, management works hard to build a company at which staff want to retire.

This is the highest praise, and the founders are proud of the team they have assembled and the incredible culture Trace has created. The culture stems from its core values – Safety, Excellence, Balance – and the purpose statement of the company: “Helping you have a great life.” Trace works hard to live that purpose daily.

“We realized that we are a purpose driven company and we truly want our people, clients and suppliers to have a great life – whatever ‘great’ means to them,” says Smith.

To support the purpose, the partners introduced annual themes like “Simplify,” “Open our Minds” and “Positivity” to empower and guide the team. They also give back to the communities. In the early days, money was tight so the firm donated their time, and the staff continues to volunteer for a variety of causes across locations. Trace donates one per cent of its profits to a variety of different charities every year and gives staff a dollar amount to donate to causes that are meaningful to them. Staff can also participate in the annual social media contest by creating fun and creative YouTube videos about their work, and the team receiving the most views wins $1,000 for their chosen charity.

As it’s grown and matured as a company, so has its commitment to diversity, equity, inclusion and Indigenous engagement. Trace is committed to Canada’s Truth and Reconciliation Committee’s Calls to Action and has recently joined the Progressive Aboriginal Relations program as a step in reconciliation.

“We believe we have the responsibility to learn and do better,” says Haight.

Through holiday and theme parties, team building events, philanthropy and the engagement of staff in the company’s direction, Trace has created a culture that puts people first.

“We’re 15 years in business now and feel like we are just getting started,“ says Haight. “We are still enjoying what we do and can’t wait to see what we can achieve in the next 15 years.”