Taking a look back at the year just concluded can be a sobering exercise. My year-end column of just 12 months ago touched on pessimistic markets, unemployment concerns and the effects of COVID on a largely-unvaccinated population.

To be clear, I mentioned there were some signs even a year ago that a recovery was around the corner. What we didn’t know was the strong global economic rebound would contribute to energy shortages, and that Alberta would soon lead Canada in economic growth.

What a difference a year makes.

I can’t overstate the importance of Canadian energy in the context of these global shortages, where Asian and European manufacturing has slowed as a result of a lack of natural gas to power factories, where a third of UK gas stations were shuttered earlier this year for a lack of gasoline supply, and where blackouts hit a number of U.S. states as a result of extreme weather, poor planning and under-investment in energy development.

It would be hard to argue that nobody saw it coming. While there were some surprises around the margins, such as unforeseen (and in some cases tragic) storms in specific locations, the trend toward demand growth for energy has been well understood.

Organizations from the International Energy Agency to Deloitte – to name only a few – have been predicting future demand growth in energy for months or more. It’s time we listened.

We still lead the world in emission intensity reductions, renewables, clean-tech, water recycling, carbon capture utilization and storage, methane emission reductions and innovation, and we’re still one of only a few global oil and gas producers with carbon pricing.

As stories go, this is a powerful one. Combine it with our abundance of natural resources, our educated workforce and our enviable research and development network and there’s no doubt Canada’s energy future is strong.

I’ve mentioned in the past the fact that a study in the journal Science found that if all global oil producers adopted Canadian flaring and methane standards, then the emissions from producing a barrel of oil would drop by 23 per cent, equivalent to taking 100 million cars off the road.

And by now you know that of the world’s top 10 oil exporters, Canada ranks first on at least 10 environment, social and governance indices, from 2020’s Environmental Performance Index to the Sustainable Development Index 2020.

Moving into 2022, Canada’s energy and natural resources sector is motivated to make the strongest possible contribution here and around the world.

Cody Battershill is a Calgary realtor and founder / spokesperson for CanadaAction.ca, a volunteer-initiated group that supports Canadian natural resources sector and the environmental, social and economic benefits that come with it. 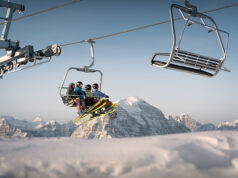