Over the last four years, Calgary’s Chamber of Commerce has undergone transformational change. The sale of its building and relocation to a new, modern space (think exposed brick, glass walls and open spaces); an overhaul of its membership structure to a value-tiered approach; and a renewed focus on members and what they desire.

This year’s incoming Chamber chair, David Allen, is all for these changes, and more. “This is not your father or your grandfather’s Chamber,” Allen says from a glass-cube meeting room at the Chamber’s offices located on the sixth floor of the historic Burns Building. “Don’t expect to see oak-panelled walls and brass doorknobs, it’s not like that.”

The 45-year-old entrepreneur (and professed gearhead who loves working on motorbikes) says it was the Chamber’s transformation that originally compelled him to get involved in 2012. “I wasn’t interested in the old Chamber, but I got interested in the new Chamber. I sat with Adam [Legge, president and CEO of the Chamber] and he said this is where we’re going and these are the challenges we face. I really took an interest at that time.” Allen became a member of the board of directors and last year served as vice-chair.

Originally from Nova Scotia, Allen moved to Calgary in 1996 for the same reason many people do. “There was lot of opportunity at the time, and there still is,” he says. “The entrepreneurial drive, you could feel it as soon as you arrived.” He worked in real estate for many years – as president, Calgary and region communities, for Brookfield Residential, and as vice-president at Carma Developers – before starting his own development management company, Situated Co., in 2015.

“I wanted to get closer to the customer and get back to projects; I love doing projects,” he says. “The higher you go in larger organizations, the further and further away you get from that. I wanted to keep an external focus.” He also wanted to spend more time with his wife, Theresa Toth, and two sons, now aged 11 and nine.

From an entrepreneurial family – Toth is a recipe developer and cookbook author, his father is in real estate, his mother is an author and his brother-in-law has a gaming business – Allen credits the support of his family for much of his success. “Our family has always been of the view that if you find something you love to do, go after it and work hard, you’ll be successful. Having that many entrepreneurs in the family is really supportive.”

He also praises the Chamber for all the support it gave him while starting a business during the downturn. “I met my bookkeeper through [the Chamber]. I met one of my biggest clients through the Chamber.”

Notwithstanding dark economic times, Allen’s company has continued to grow. “People needed a new way forward, a different way of doing things,” he explains. “I didn’t really notice a downturn. I knew it was going to be a little bit tougher, but I think in some respects it would have been harder before because people wouldn’t have realized they needed the help they did.”

But he’s quick not to downplay the recession. “At this time Calgary has the highest unemployment rate of major Canadian centres,” he points out. “This is a game-changer for Calgarians and makes us feel more like many other areas of Canada have. Businesses need to compete more, innovate their offerings faster, and for those who haven’t shifted skills or service offerings now is the time to adjust and fast.”

According to the Chamber’s research and forecasts, things are likely to continue to get at least a bit worse before they get better. “What this means is that we have a large number of educated, talented people, many of whom formerly made excellent salaries, and all of whom are looking for a place to dedicate their talent to,” Allen says. “They want to get to work and our biggest loss will be if they leave our city.”

A dynamic mix of large and small industries and businesses is what Allen hopes will emerge from the downturn. “We need to define our future, and I believe more and more our members are doing just that,” he says. “We’re setting record numbers for new business starts; albeit a different mix than in past years.”

While he recognizes the oil and gas industry as a major driver of Calgary’s economy, he highlights other industries as well. “There are incredible opportunities in our growing biotech and health care, engineering, transportation and logistics, tourism, and digital business industries which are also very exciting to contribute to Calgary now and in the future.”

Political stability, he says, is needed for the path forward. “Outsiders are wondering what is going on politically with our rapidly changing regulatory environment, with our business health and with our growth,” he says. “They need to see us stabilize more and not come under more stress.”

For his one-year tenure as chair, Allen has many plans and will draw from his experience in both large organizations and as an entrepreneur. With such a short period of time to work with though, he has three top goals.

The first is to refocus the Chamber on its thousands of member businesses. “Members are our customers – if we’re not listening to what they want out of their Chamber and what their business challenges are and where they see opportunities, then we can’t help.”

His second priority is to evolve the Chamber into a deeply digital organization of the future. “The digital aspect has been a real eye-opener for the entire board; if you’re not a digital business, you’re a dying business,” he says. “It keeps you relevant as an organization.” For the Chamber, this means obliterating geographic boundaries, so that members can come from anywhere in the world. It also means more self-service models, having more insights pour into the Chamber through digital space and having a greater digital presence. “Making sure the Chamber is accessible 24-7.”

His last, but by no means least, priority is to ensure all levels of government have core business issues on their agenda straight from Chamber members. “We have a municipal election coming up next year and we want to make sure that they’re listening to what businesses are going through here,” Allen explains. “We’ll do this through tapping our members for insights, helping them make sense of what they’re asking and then actually putting policy positions forward that can help members. That will be a nice platform we can use for the provincial election shortly thereafter.”

He’s looking forward to continuing to work with Legge and others at the Chamber. “Adam brings terrific energy to this team,” he says. “He’s well respected. Under his leadership, the Chamber has really punched above its weight and its space.”

Indeed, the Chamber’s transformation has been, so far, a success. Membership has increased to roughly 2,000 members and this year’s Small Business Conference – a marquee Chamber event – drew a record turnout of 1,600 attendees, double the amount at last year’s conference.

Legge is likewise full of praise for Allen. He highlights Allen’s work thus far on the board, particularly as chair of the Policy Directions Council. “David has really helped to guide the overall policy-related work of our organization,” Legge says. “He brought a big-picture, strategic perspective to the issues affecting our competitiveness and prosperity.”

Legge sees Allen’s experiences in both large organizations and as an entrepreneur as a boon to the Chamber. “He’s always got a great perspective of the considerations for either side. He’s able to bring that very balanced perspective to the work we do.”

After relocating 20 years ago, Allen considers himself a Calgarian at heart and is optimistic for the city’s future. “Calgary will continue to grow,” he predicts. “We are going to grow at a slower pace than we did at the peak and with a different mix. We also have different employment skills needed than what we had in the past.” Despite the downturn, he notes Calgary remains a preferred destination for new Canadians. Another positive is the city’s young demographic who are putting down roots and growing young families.

If offered the chance, he’d move here all over again. “When you look around, where do you want to spend your time in Canada?” he asks. “There’s very few places you can go if you want to grow a business. Calgary still has to stay competitive, but from a lifestyle perspective this place is pretty great.”

When the year is over, if Allen has his way, Calgary will be even greater. 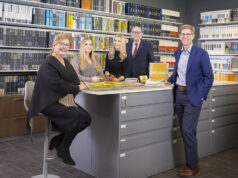