In the business mosaic that is Calgary, like its cultural mosaic, immigrants are a key factor.

“We have seen more than 315,000 people move to Calgary in the decade up to 2015 and today more than 26 per cent of the city’s population is made up of immigrants to this country,” notes Mary Moran, president and CEO of Calgary Economic Development (CED). “And that number is growing. Over 41 per cent of the people who moved to Calgary in 2015 were from outside the country. The top three countries are the Philippines (10.9 per cent), India (10.0 per cent) and China (9.5 per cent).

“Calgary is not in the boom period we saw in oil and gas a few years ago, but we continue to see our population expand,” she explains. “Because Calgary is a global city, and so many of the companies in the oil and gas sector are international, it is reflected in the trending at the international element of the Calgary community.

“In the past five years, the agencies that work with new Canadians say they are seeing a substantial increase in the educational attainment in the economic immigrants to Calgary. We are a city with the second highest level of education achievement in Canada and the immigrants to Calgary are adding to that talent pool.”

According to Immigration and Small Business, a major report done by the Canadian Federation of Independent Business (CFIB), representing over 105,000 SMEs operating in all regions and sectors of the economy, immigration has played an important role in the development of Canada, both culturally and economically.

Almost 15 million people have immigrated to Canada since Confederation and, as the report tracks and documents in detail, Canada’s immigration policy has three key focuses: “to foster a strong viable economy in all regions of Canada; to reunite families; and to fulfil the country’s international obligations and humanitarian tradition with respect to refugees.”

“Fewer economic immigrants were admitted this year due to the prioritization of refugees,” explains Calgary-based Amber Ruddy, CFIB’s director of provincial affairs for Alberta. “The federal government should be flexible and allow for increased numbers of immigrants to match the needs of our labour market. We need to create the conditions where business can thrive when people work hard, take risks and create jobs. Small businesses will be the first to tell you that their employees are their greatest strength and a strong work ethic is valued and rewarded.”

In the business community, there is constant buzz about the value and the role of immigrants. Many immigrants have shown to be entrepreneurial and determined, particularly in the world of small and independent business.

“Immigrants to Calgary have proven to be highly educated and skilled and very entrepreneurial in nature,” Moran points out. “One study showed that nearly 20 per cent of immigrants are self-employed, compared with 15 per cent of Canadians. As our population continues to diversify, so does the demand for specialized products and services (restaurants, food, etc.) to meet the needs of those communities.

“People see Calgary as a place where they can turn ideas into successful businesses and that extends to the new Canadians in our community.

“We have been focused on our labour force and marketing the capabilities of the highly-educated people we have in Calgary,” she says. “One of the things we are doing is looking for ways for workers to pivot their skills from say the oil and gas sector to the renewables sector. We’ve had studies from KPMG and Monitor Deloitte that said our people were Calgary’s major competitive advantage over peer cities around the world.

“Because of our position as a global energy centre we also are extremely well represented in the STEM – science, technology, engineering and math – skills that are required in business.”

“Many of our participants appreciate the value of the free market and how finding their niche in this marketplace can help them create some measure of personal and family financial security,” explains Bruce Randall, executive director of the Calgary Region Immigrant Employment Council (CRIEC), a not-for-profit organization that connects trained employees, companies and organizations. “What we call our ‘talent’ are resilient, customer-service focused, flexible, adaptable and resourceful. They are willing to take calculated risks and have the necessary skills to thrive as business owners.”

While skills, qualifications and education are vital factors for what it takes, especially in the Calgary business world, CFIB, CED and CRIEC facts show it’s inaccurate and misleading to imply they are the only obstacles to be overcome.

“Right after taxation, red tape is the next highest priority for entrepreneurs and they want governments to take action,” the CFIB’s Ruddy warns. “Red tape refers to a variety of frustrations such as complying with rules that make little to no sense, delivering minimal benefit with much cost; wasting time in line or on the telephone with governments, trying to figure out compliance obligations; filling out cumbersome, unnecessary paperwork; and suffering the uncertainty and delays that can come with permit or licence approvals.

“One in three business owners say they may not have gone into business if they knew about the burden of regulation.”

According to CED’s Moran, “A variety of obstacles can come into play for all small business, but with immigrants from elsewhere in the world, there can be further challenges with everything from inadequate language proficiency, to credential recognition, access to capital, and understanding of how to do business in Canada and local market knowledge.”

“Several of our participants who are internationally-trained lawyers have opened their own legal practices here in Alberta,” Randall notes. “Another CRIEC participant has launched an online business. And the coolest story might be a Syrian refugee who launched a catering business.”

Philippe Poncet’s business story is a sweet success. “When it comes down to it, it’s all about being determined, following through on creative ideas and passion,” says the Calgary-based and talented French pastry master chef.

“It’s unfortunate, but some people never realize what work life is all about,” he says with his infectiously charming Parisian accent. “You have to love what you’re doing. I worked as a biochemical engineer for 10 years and it was good, but I had a lifelong artistic, creative feeling and I needed to do something about it.”

He speaks glowingly, and with affection, about the programs offered by Calgary’s Momentum Community Economic Development Society for small business people to acquire business skills. He learned the opportunities – and pitfalls – of running a small business, found a location, went for an intense internship at an artisanal bakery in France and opened his exquisite Eclair de Lune pastry and bake shop on 40 Avenue NW.

He credits his Calgary small business success to having an original good idea, location, business smarts, 90-hour workweeks and a whole lot of passion.

Doing business in a fusion market 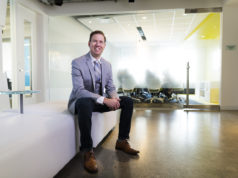 Charging Into the Future 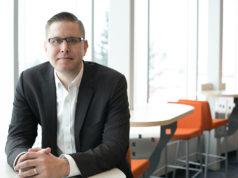