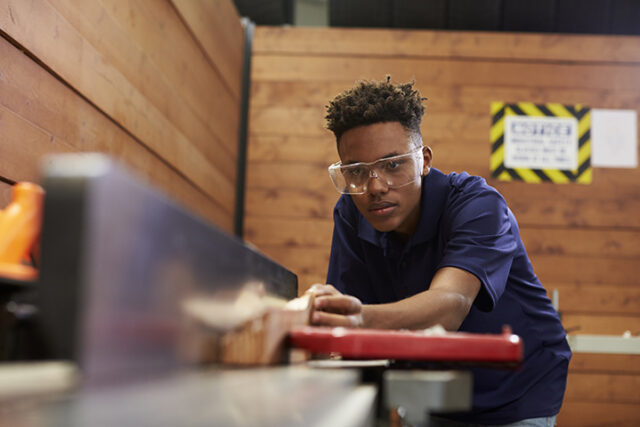 There’s no denying it, the world as we knew it three decades ago is a vastly changed place today. In Alberta, skilled trades and apprenticeship programming has long contributed as a massive economic driver to the economy, but the legislation regulating it was over 30 years old. That’s why the Alberta Government, post-secondary institutions, and industry partners across the province have collaborated to modernize apprenticeship education.

It’s an industry that’s expected to see critical demand in coming years, but also offer rewarding career opportunities. “Working in the skilled trades is a great place to be and find meaningful employment,” says Jim Szautner, dean of the School of Manufacturing and Automation and the School of Transportation at the Southern Alberta Institute of Technology (SAIT). “We’re seeing many more mature learners coming into the skilled trades as well as people pivoting and transitioning careers with apprenticeship programming to improve their standard of living.”

The overhaul comes thanks to recently passed legislation. In a response to predicted labour demands in upcoming years and the need for increased hands-on real-world training scenarios, the Alberta Government created a new framework to support the province’s economic recovery, stimulate job creation and allow employers to better develop their own talent. “We know there are thousands of tradespeople retiring every year in the province,” says Alberta’s Advanced Education Minister Demetrios Nicolaides. “We need to recruit and encourage more young Albertans to pursue incredibly successful career opportunities in the trades.”

The strategy, Alberta 2030: Building Skills for Jobs, responds to recommendations made by the Skills for Jobs Task Force, a cross-section of representatives from post-secondary institutions and trade unions. Formed in 2019, the task force examined the previous apprenticeship system. Their final report submitted last fall called for a complete rewrite of the 30-year-old Apprenticeship and Industry Training Act with approximately 50 improvement recommendations. “We listened to these experts and took their advice to heart,” says Nicolaides, adding that other countries often hold trades and apprenticeship to a higher esteem than Canada does while the improvements aim to change that. “We want to create a parody of esteem and an environment where a trade certificate has the same value, merit and worth in society as a university degree.”

This distinction reduces regulatory inefficiencies and boosts flexibility. “By distinguishing a trade from apprenticeship education, we can better train and educate students who pursue a new career using the apprenticeship style of system, without necessarily having it become a designated trade,” says Nicolaides.

SAIT and other institutions are reviewing existing programs within business, technology and other departments to identify opportunities that bring employers into the fold earlier in a student’s journey. “One of the underlying tenants of apprenticeship education is the heavy emphasis upon on-the-job learning,” says Szautner. “Fifty-one percent of this education is done on the job and employers now have opportunity to participate in program. This helps them create internal pipelines of talent by participating in these programs so they can help meet the labour force needs of the future.”

Research conducted by the Canadian Apprenticeship Forum indicates a significant return on investment for employers who invest in apprentices and their training. “When employers invest in their people, they tend to be more motivated and engaged,” says Szautner. “By fostering the development of someone involved in the organization, that individual learns the corporate culture and the job at the same time.”

Relationships between postsecondary institutions, students, and employers will now be streamlined. Open applications into the fall of 2021 invited industry members to join the new Board of Skilled Trades and participate in the apprenticeship education system. “What makes apprenticeship programming work so well and be so successful is the underlying foundation of partnership between each stakeholder in the apprenticeship triangle,” says Szautner. “Government, post-secondary institutions, and the industry all have a reciprocal role to play. Participation on the Board of Skilled Trades or other industry advising groups breathes new life into the program and creates opportunity for industry voices to be heard.”

The new Board of Skilled Trades will enjoy increased flexibility, independence and autonomy than the previous Alberta Apprenticeship and Industry Training Board had. “The new board, along with the entire governance framework, is a way to build stronger partnerships,” says Nicolaides. “We found ways to give more authority and decision-making independence to the Board of Skilled Trades rather than having all that authority vested in government and its associated bureaucracy. It will make the trades environment more streamlined, efficient and responsive.”

It also comes with stronger representation from across the industry. “For the trade system to operate effectively, we need government, industry employers, representative unions and postsecondary institutions all at the table. These are the critical partners that make the system function well and will reinvigorate the system,” says Nicolaides.

In addition, certified professionals returning to postsecondary studies to pursue a diploma or bachelor program will receive greater recognition for their skills and knowledge. “The new legislation gives Journeymen and those with a trade certification greater academic recognition,” says Nicolaides. “It opens so many more doors for our trades professionals to build on their prior knowledge while upgrading and completing a diploma or degree.”

It’s a move that better recognizes the Journeyperson’s aptitude. “Anyone who currently holds their Journeyperson certification should be proud of their achievement,” says Szautner. “The work they’ve put into that shows they have academic rigor as well as on-the-job skills and requirements to be highly employable. I applaud all the people out there carrying this certification. It’s something they should be very proud of.”

As prospective students come into apprenticeship and skilled trades educational programming, they should look forward to more options and choices opening up when it comes their educational journies and careers. “That model of going to school for a few years and then working in a role for 30-to-45 years is completely outdated now,” says Szautner. “We’re seeing better educational opportunities for people to continue their lifelong journey, remain current and relevant, or pivot their career if they choose to for any career destination they want to arrive at.”