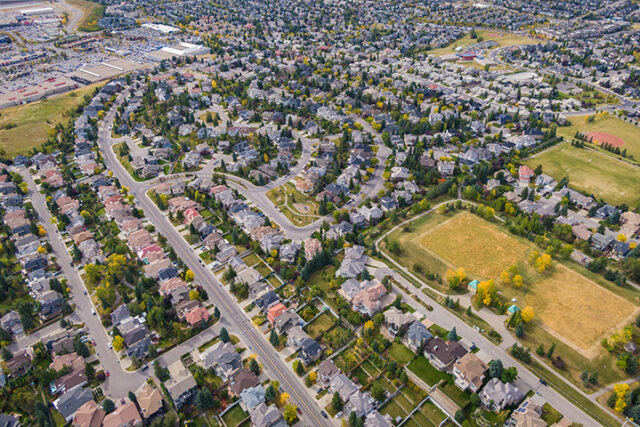 Despite lockdowns, shutdowns, public health worries, layoffs, school closures and people working from home making for one of the bumpiest rides in Calgary business history, Calgary’s real estate market may be in transition but it is active, strong and feisty.

According to CREB’s most recent Quarterly Update Report, by the end of the first quarter, there were 5,945 sales in Calgary, which works out to 43 per cent higher than the 10-year average and the best start to the year since 2007.

CREB explains that (nationally) the economic challenges associated with COVID-19 brought about a dramatic rate cut from the Bank of Canada and an even more significant drop in the discount rates for mortgages. Calgary stats also show that the low interest rate environment, combined with pent-up demand and a trend of increased savings, is supporting stronger than expected gains in Calgary resale activity.

“It is currently exceeding expectations,” says CREB chief economist Ann-Marie Lurie. “But rising prices are expected to support new listings growth and also impact the pace of sales growth. This will help support more balanced conditions for the Calgary market.”

She adds that new listings rose to the highest first-quarter levels seen in over a decade while it did little to move Calgary’s overall inventory levels, which averaged 4,687 units in the first quarter.

The tightening conditions that started halfway through last year have caused prices to trend up, and the price growth pushed quarterly prices four per cent higher than the first quarter of last year. “It has been counterintuitive to many, considering the job loss and economic challenges that face the province and the city,” she says. “But this is still a story of recovery for prices, which currently remain well below the highs recorded in 2014.”

There’s a consensus: 2020 has been ‘one of those years’ for real estate in most Canadian municipalities. The markets are abuzz with trending, analysis, strategizing and market issues like housing bubbles, parabolic prices, affordability, the tightening screw of another mortgage stress test and more.

“Market conditions have become tighter over the last year everywhere,” notes Shaun Cathcart, senior economist of the Canadian Real Estate Association (CREA). “Among Canada’s five key markets – Calgary, Toronto, Vancouver, Edmonton and Ottawa – Toronto and Ottawa have the tightest demand-supply conditions. Calgary and Edmonton increasingly shifting to a seller’s market. Just one year ago, they were buyer’s markets, or close to it.”

“The past year has been filled with twists and turns all over the world,” says Alan Tennant, CREB president and CEO. “The Calgary housing market was no exception. Looking forward to the second half of the year, Calgary has moved into sellers’ market conditions.”

Lurie gets Calgary-specific about how national issues like skyrocketing home prices, house bubbles, the stress test and affordability impact the Calgary market. “Most of the recent gains in Calgary prices is related to the seller’s market conditions. Low interest rates and pent-up demand have supported strong growth in sales. The pace of new listings growth keeps supply levels low, favours the seller and causes steeper price gains. Of course, buyers must still meet the mortgage qualification rate.

“But the five-year discount rates are amongst the lowest we have seen since figures have been tracked.”

Real estate professional rarely speculate and Lurie adds that the Calgary will likely remain a seller’s market throughout most of this current quarter. “However, as prices continue to rise, we could start to see more new listings. This may help push the market toward more balanced conditions.”

CREA’s Cathcart doubts warnings about a Canadian housing bubble. “The current pace of price growth is entirely in line with the current historic demand-supply imbalances. It was there before COVID-19 but it may have been turbocharged by the pandemic.

“Trending shows that 2020 was the year that a home became everything. It’s not surprising that so many people who did not have one of their own to ride out this pandemic, really wanted one. Many who did have a home hunkered down and were not inclined to give it up.” He points out that a demand-supply imbalance causes buyers to compete against each other for scarce listings, often pushing prices up.

“On the affordability side, part of this has been offset by rock-bottom interest rates. Affordability has become tougher over the last few years but housing is still affordable in Canada, which is why so much is selling – but it’s not cheap.”

resulting in stronger price gains. CREB stats also caution that lack of job growth for higher-paid professional positions could result in persistent imbalances in the higher price ranges, impacting price recovery in the upper end of the market.

Despite recent speedbumps, the Calgary outlook is good. “There still remains choice for homebuyers of all types, especially in the condo market,” Tennant adds with reams of stats and much enthusiasm. “It’s also exciting to see a city like Calgary being consistently named as one of the most affordable and best places to live in the world.”