After 39 years in the profession, Ron Poon – one of Calgary’s best-known and respected architects – has retired from the company where he has been an integral part of the leadership team and has taken on a new development role with fast-growing Arlington Street Investments.

A founding partner with his friend Bruce McKenzie of Poon McKenzie Architects, they sold the company in 2007 to become part of the huge Norr Architects Engineers Planners, and Poon has served it in the position of executive vice president-Canada.

Arlington president and CEO Frank Lonardelli, who has worked with Poon for years, welcomed him to his role as managing director of the new division, Arlington Street Developments, to direct and manage all development projects from land use to stabilization.

Lonardelli has also made the decision to relocate his corporate office from downtown to the top floor of his building at the northeast corner of 17th Avenue and 5th Street SW – above the National on 17th pub – to accommodate the company’s expansion.

This will bring his team onto the avenue where he has strategically acquired several high-profile development sites; an area he plans to help become Calgary’s future high street.

Currently Arlington Street owns 32 buildings on seven separate sites along 17th Avenue, where they will provide the basis to tailor unique shopping, entertainment and living experiences throughout this popular cultural destination. 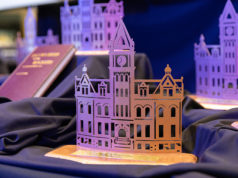