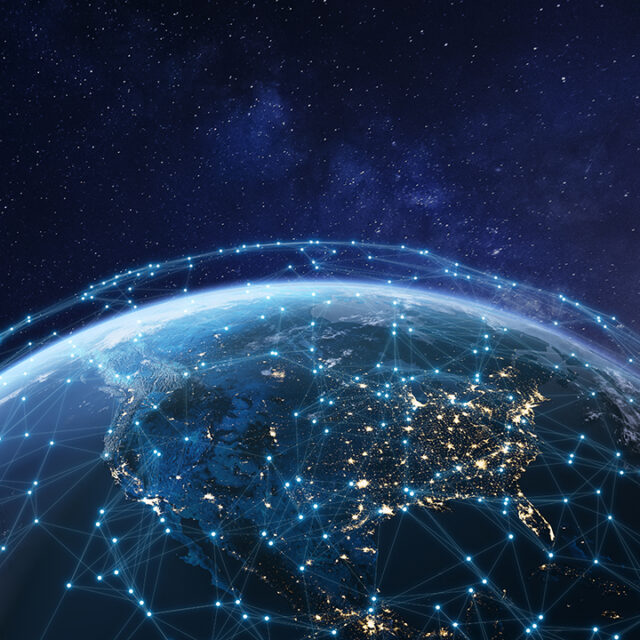 Imagine a future where a surgeon can remote operate on a patient from the other side of the province.

Or where a heavy equipment operator can safely navigate an excavator … without ever stepping foot onto the job site.

Or where city operations staff can anticipate, and then mitigate, when a pipe will burst.

5G has virtually every industry in the world on the edge of its collective seat with the key to unprecedented connectivity in the form of lightning-fast speeds, lower latency – defined as the time it takes to transmit and receive information – improved security and the ability to connect more devices.

“5G can fill the unlimited bandwidth of wanting to better connect people and open the door to a new world of applications,” says Steve Liang, professor and Rogers IoT Research Chair at the University of Calgary’s Schulich School of Engineering, as well as founder and CTO of SensorUp, an Internet of Things (IoT) location intelligence platform provider.

“This is more than just better video games and faster smartphones. Among many other things, it allows for people to collaborate in true real-time. A firefighter making mission-critical operational decisions … that’s 5G stuff.”

And when in combination with IoT, this potential for improved connectivity could drastically change the workforce of tomorrow.

“In this scenario, every frontline worker could be fully connected, fully protected and fully aware,” says Liang. “For example, they could have wearable smart glasses that delivers the contextually relevant information they need in real time. It could warn them if they’re about to operate a piece of machinery incorrectly, or monitor their health vitals and remind them when they need to get some fresh air.”

With the key to unlocking the potential of 5G on the horizon, the Canadian telecommunications industry continues to double down on the technology. The Canadian Radio-Television and Telecommunication reports that in 2019 (the most recent available data), service providers spent a reported $11.9 billion on capital expenditures to upgrade networks, $8.9 billion of which was spent on wireline networks.

TELUS launched its 5G network in June 2020 with the selection of Samsung, Ericsson and Nokia as network infrastructure partners. The network is now available across Canada, including 17 communities in Alberta and 64 communities across the country.

Over the next three years, TELUS says it will invest an additional $40 billion to support the roll out of its 5G network in Canada.

“Before the promise of 5G becomes a reality, the adequate fibre infrastructure must be in place,” says Navin Arora, president of TELUS Business Solutions. “And to ensure we’re ready, TELUS and our partners have been laying the foundation for 5G by building TELUS PureFibre – our most advanced broadband network with virtually unlimited capacity and unparalleled reliability.”

Bell Canada similarly started building out its 5G network last June alongside Ericsson and Nokia, with the goal to doubling its 5G coverage by year’s end. Today, it’s offered in approximately 150 centres across Canada.

This past February, Bell announced it will invest upward of $1.2 billion in capital expenditure to expand its networks across the country by 2023.

“We’re going quickly. We’re excited to get at it,” says Claire Gillies, president of Bell Mobility. “The next big thing for us is what we’re referring to as early 5G service (in select Canadian centres for capable smartphones when they become available), followed by what’s called a ‘spectrum auction’ in June for the higher-frequency 3,500 MHz spectrum – otherwise known as the golden band. That will take early 5G to the next level.”

The 3,500 MHz spectrum auction held by the Canadian government was previously delayed due to the ongoing COVID-19 pandemic.

Meanwhile, in mid-March, Rogers announced at $26-billion takeover of Calgary-headquartered Shaw Communications and its subsidiary Freedom Mobile that executives say will allow the companies to concentrate on building a new generation of networks.

In a press release, the combined company says it will invest $2.5 billion in 5G networks over the next five years across Western Canada. Company representatives were not available for additional comment by deadline.

The deal is currently being reviewed by the Competition Bureau. The combined company says it expects the review to be complete by mid-2022.

The City of Calgary has similarly invested through its Digital and Fibre Infrastructure Strategies. Launched in 2015, it has led to the construction of a 550-kilometre fibre network extending to all quadrants of the city, as well as one of North America’s first municipally owned Long Range Low Power Wide-Area Network (LoRaWAN).

Unique among Canadian cities, Calgary provides free access to City fibre and data servers through the local internet exchange point, the Calgary Internet Exchange (YYCIX). According to Calgary Economic Development (CED), it is the fourth largest internet exchange in Canada.

A recent study commissioned by CED titled 5G and Connectivity found Calgary has an opportunity to become Canada’s most connected city.

Authored by Gregory Taylor, associate professor in the Department of Communication, Media and Film at the University of Calgary, the study notes Calgary has demonstrated “remarkable policy and process foresight” over the past two decades that makes it an attractive place to develop 5G technologies and applications.

In an interview, Taylor notes that 5G service offered in Canada in 2021 is still a combination of 5G and 4G systems. A true universal 5G network is still on the horizon, pointing to the 3,500 MHz spectrum action as a pivotal point in the ongoing 5G story

“(5G) is something that has been building for some time. It is potentially a game-changer. I don’t want to downplay that. But things are still unfolding,” he says. “A lot of the promise of 5G remains just that – promise. We’re not there yet.

“Yes, we have faster speeds. Yes, some of this is very real today, especially in the technology space. But it’s not life-changing yet. The real ‘wow’ stuff is probably two to three years away when we’ll start seeing those 100-times faster speeds.”

At which point, Taylor asks: What will we do with that?

“It won’t be just about speed. For example, 5G should bring IoT to reality because we’ll have a lot more things connected,” he says, pointing, as an example, to their role in realizing autonomous and self-driving vehicles. With 5G-connected sensors and video analytics, cars will be able to communicate with everything on the road, reading traffic conditions or automatically yielding to an ambulance.

5G could also support the digital transformation of agriculture and farming – for example, supercharged drones with sensors that can monitor crops to assess fertilizer and pesticide applications for improved crop management and growth, thereby improving yields.

Meanwhile, Arora notes TELUS is already working with leading medical diagnostics companies to explore how mobile MRI and CT ultrasound scans can be taken in an ambulance, which are then shared with the hospital in realtime.

“In the near future, 5G will improve health experiences for Canadians with faster, more secure connections for video health consultations and remote health monitoring,” he adds. “Eventually, we’ll see remote surgeries made possible. Imagine Canadians in Inuvik or Yellowknife being treated by a specialist surgeon in Calgary thanks to a technology that provides safe and real life reaction time.”

Dramatically increased speeds and capacity, coupled with lower latency, will also support the rollout of new services. Gillies notes quicker reaction times and robust high-quality graphics will encourage the further proliferation of cloud gaming, as well as change the way we interact with everyday content – even the “Good ‘Ol Hockey Game.”

Bell just launched a 5G in-app technology called TSN 5G View that allows fans to control how they watch a hockey game by zooming in and out and rewinding from various angles at any time during a live game. The technology is supported by 80+ in-game cameras broadcast live and would only be available through 5G technology.

“(5G) is the next big growth engine because of what it allows us to do,” says Gilies. “Whether it’s autonomous cars or smart cities, remote medicine, cloud gaming or augmented reality, the list just goes on. That’s why we get excited.”